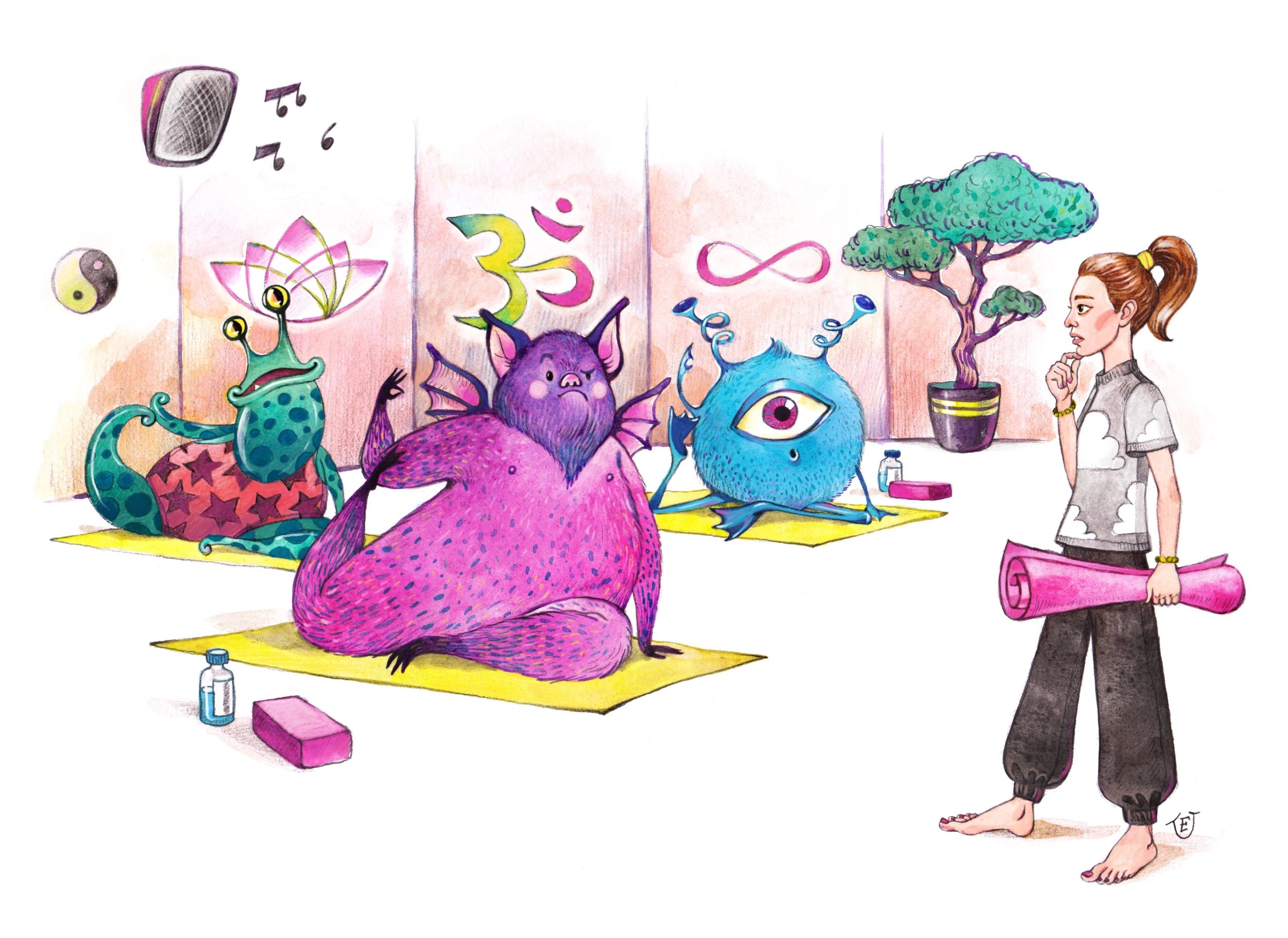 All relationships change over time. Relationships with the people in our lives, with the environment we live in, the food we eat. Over the years, my relationship with yoga has changed, too.

The first time I took a yoga class, I didn’t like it. It was too slow, too passive. When I walked into the brightly lit studio, it was packed with similar-looking women in their 30s and 40s with expensive-looking yoga mats and Lululemon clothes. I don’t remember the teacher as much as I remember the crowd. They intimidated me. I was a 19-year-old college student who borrowed a mat from the studio for $3 and wore sweatpants and a baggy t-shirt. The vinyasa class was about 45-minutes long, and the whole time I was in the back of the class trying to figure out what the hell to do with my body.

I felt like an outcast, and I hated that feeling. So I retreated from the world of yoga after just a tiny glimpse into what it could offer.

I didn’t take another yoga class for a few years. When I did take a class again, it was at my local YMCA, and there was a vibrant mix of students. People of all ages arrived in gym shorts and flowy pants. Almost everyone had rental mats. One lady practiced on a thin towel. The instructor was an older woman with full hips and thick, blonde hair down to her waist. She had a gentle presence that exuded kindness and compassion. Her teaching style was slow and intentional, with a subtle intensity that was refreshing and liberating. This time, yoga felt safe. It felt like a place I could belong and not be judged.

The following spring, my husband and I moved from North Carolina to NYC. I was new to the city and didn’t have too many friends yet. Looking back, I realize now that I needed to belong somewhere. I was looking for a place where I could fit in. I craved connection with others yet, at the same time, was too shy to sign up for a local Meetup activity. My introvert tendencies needed an entry point that felt easy and doable. A yoga class could offer that, I thought.

The thing is, I no longer had the quiet comfort of my discounted YMCA yoga class to lean on. If I wanted to continue practicing, I was faced with finding a new studio (mind you, this was before the craze of online yoga and fitness classes). It seemed like yoga studios were on every corner; posh-looking studios that featured any and every kind of yoga asana imaginable: hip hop yoga, bikram yoga, kundalini…

I found a studio close to our apartment in West Harlem and began signing up for classes. The studio was small, with one large room where classes were held. The teachers were extraordinary. To me, they exuded confidence and self-assuredness that I never had. In my eyes, they were devoted to their practice and wise beyond their years. I wanted to be just like them.

I dove into yoga with a dedication that was fiery. I liked fiery classes too. I loved fast-paced power yoga. The more sweat on the mat, the better. In a way, it felt cleansing. If I didn’t feel completely exhausted after a class, then I wasn’t working hard enough. The other students—mostly young women in their 20s and 30s—shared the same desire for intensity. It was almost as if we were secretly competing with each other.

Every day, I practiced yoga. I bought an annual membership to that same studio. I went to classes, sometimes twice in one day. When I wasn’t able to attend a class, I’d practice in our tiny apartment. I admired the teachers and wanted them to see how I was progressing. I remember one day in particular: I finally nailed crow pose, and the teacher came by, put her hand on my back, and said what an incredible job I was doing. Hearing those words was like a balm to my soul. I felt seen and special—like I belonged to something bigger than myself. I had found my “thing”—something I was good at. Something that made me feel confident and strong.

One day in class, I was priming my body for bhujapidasana—shoulder pressing pose—and I suddenly heard a pop in my wrist. Something was very wrong. It was numb at first, and then the area all around my wrist and thumb was on fire. The rest of the class, I was in pain. I had to take a child’s pose at one point because it hurt so badly. I couldn’t bear to speak up and risk embarrassing myself to the class and teacher. I pretended everything was fine, but the walk home felt like a walk of shame.

At first, I felt like yoga betrayed me. I felt cast out as “undeserving” of the practice that I had grown to love.

Would the teacher or students have judged me or looked down upon me if I had spoken up? Probably not. But in my mind, I had failed.

For several months after, my wrist ached whenever I put weight on it. I couldn’t even do a plank pose without it hurting.

At first, I felt like yoga betrayed me. I felt cast out as “undeserving” of the practice that I had grown to love.

But as the months went by and I allowed my wrist to heal, I realized that yoga hadn’t let me down. I was the one who hurt myself because I wanted to prove I was good enough—to the teacher, my fellow students, and to myself. I had pushed my body way too far for the sake of looking like a “true yogi.” For the sake of their approval. I no longer wanted to just fit in, I wanted to stand out, to have others admire me the way I’d admired my teachers. Which, I realize now, is never a good enough reason to push yourself harder. Approval and self-worth should not come solely from external people, it has to come from within.

So I took a break from asana practice. At the time, the hiatus was strictly to let my wrist heal and recover, but what happened was a complete 180-degree turn.

My break from asana completely transformed my relationship with yoga and how I integrated it into my life. It taught me the reality of ahimsa, or non-violence. While I was off the mat, I spent more time going on walks in Riverside Park, near where we lived. I was taking things slower. I also began to question why I had pushed my body in a way that harmed me. Why did I feel the need to be like everyone else in that class? So I can’t do many arm balancing postures—big deal. Why was it so hard for me to be different? Why did I care so much about fitting in?

This introspection inevitably raised issues that I still struggle with today. Issues like embracing and loving my body and my ongoing battle with perfectionism.

Eventually, I came back to my asana practice, but with a tentative step. I decided not to take a class from that specific teacher again. Not because she was a bad teacher but because her teaching style triggered my inner competitiveness. Her motto of “Yes you can” led me down a slippery slope. It pushed me too far. I wish more yoga teachers would say “back off” instead of “push forward.” While I think pushing yourself to try new and hard things is important as a general rule of life, it can be tricky territory.

Perhaps the lesson here is for yoga practitioners to continuously check in with themselves and tune into their bodies. If something doesn’t feel right, don’t do it. It can be hard to do something that is against the grain when you’re prone to comparing yourself to others, but isn’t that what yoga teaches us—to practice ahimsa and not inflict harm on ourselves or our bodies? We can come to the practice at any time, exactly as we are, and it will be there waiting for us.

After a while, I ended up switching studios and found a group of teachers and students that were more diverse—folx of all ages, sizes, yoga levels, and backgrounds. I realized that it was important for me to see that melting pot of unique backgrounds, bodies, and minds, all coming together as one. When everyone looks the same, it triggers a sense of competition in me to stand out, to stand apart. But in this community, everyone stood out in their own way because they were all unique and different. It was a community where I felt safe and accepted. So safe that I decided to pursue my RYT certification with them—an experience that has shaped who I am today.

Today, my yoga practice looks very different. I hardly ever do fiery classes that leave me exhausted and dripping with sweat (I have running for that!). To be honest, most of my yoga practice looks a bit like rolling around and stretching. Instead of intensity, I crave restorative postures. My meditation practice carries more significance than perfecting my surya namaskar. My practice also has bled into other areas of my life, like my love for tarot cards. I’ve even used the tarot to deepen my meditation practice.

That pop in my wrist led me to discover that yoga can mean different things to different people. For myself and my body, there is more value in slowing down than speeding up. It’s a lesson I try to take with me in other areas of my life as well. For instance, when I need to make a decision (big or small!), I slow down and often step away to gain clarity. It’s helped me become more intentional about how I spend my time and energy.

There is still a part of me that is worried that if I ever go back to in-person classes again, I’ll fall into the same trap as before: that my urgency to compete and prove myself will take over. But I doubt it. Maybe it’s because I’m older now and have more perspective and awareness of my actions and thoughts. But I think it’s also something deeper… the wisdom of yoga has infiltrated into deeper layers of my being as well as my body. There is a newfound intuition in me that I have come to lean on and am constantly learning more about.

I often wonder what my yoga practice would be like today if I had never injured my wrist. What would my relationship with myself and my body look like?

I often wonder what my yoga practice would be like today if I had never injured my wrist. What would my relationship with myself and my body look like? In a way, I’m grateful my wrist gave out on me in that class. It taught me that asana is only one tiny part of yoga. It helped me set out on my own individual path—one that I’ll be walking the rest of my life.