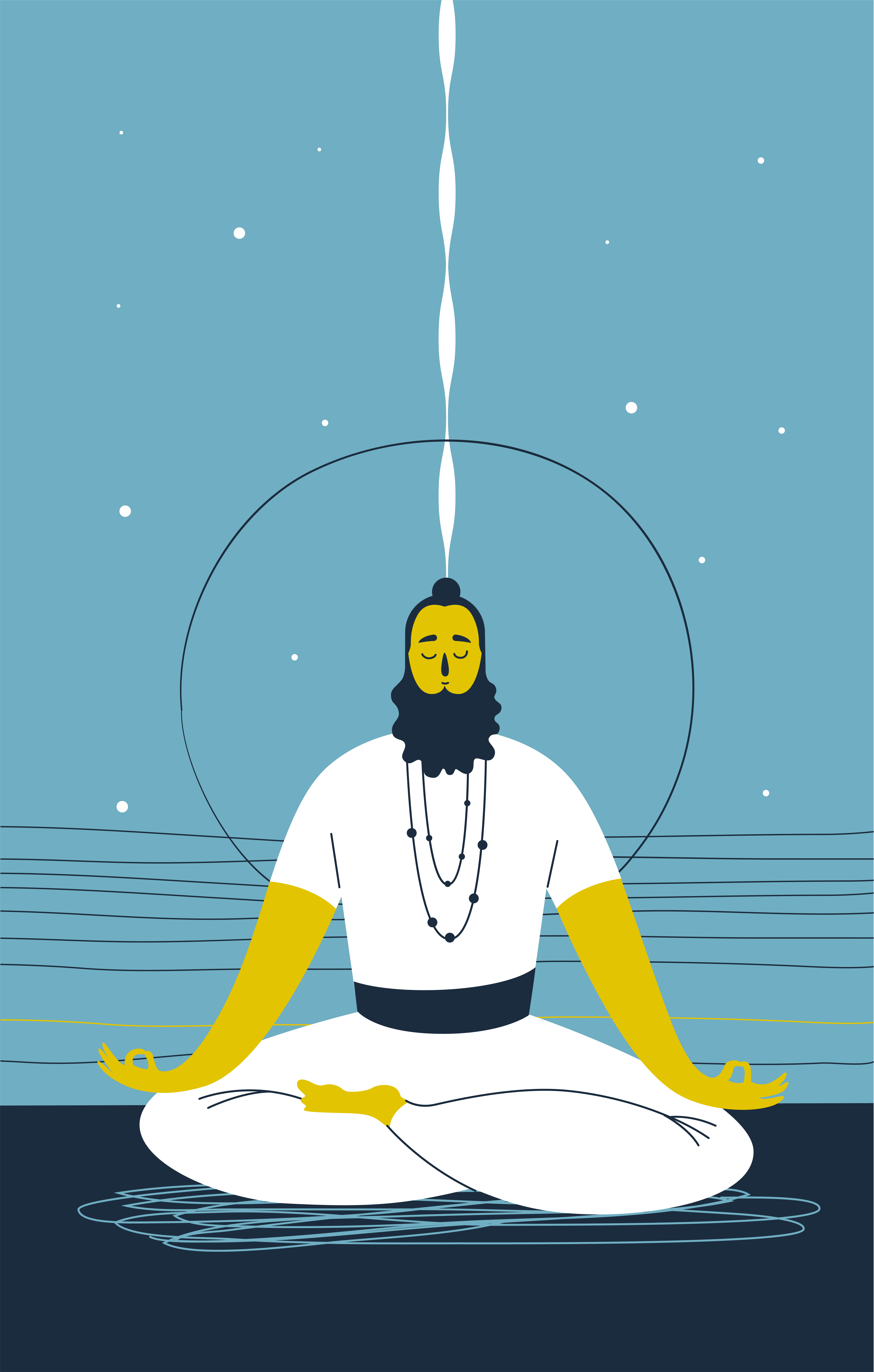 Book Excerpt and Review of Sex Drugs and Om: An Autobiography of an American Yogi by Greg Reese

Excerpt from Sex Drugs and Om: An Autobiography of an American Yogi:

It was the peak of winter sometime in the middle of the night as I shivered beneath the blankets in a cold sweat, curled up in the fetal position and scribbling mad poetry into a worn and tattered notebook. It had been several weeks since I’d been able to enjoy a night’s sleep, which was high on the endless list of drawbacks that my daily speed habit allotted. All I wanted was for it to end. All of it.

The whole mystery of my madness had gotten to me. I grew up in a middle-class family, with happy loving parents, in a progressive suburban neighborhood. And so by all accounts, I should have been a reasonably well-adjusted human being. That wasn’t the case. I had been struggling with depression and anger for as long as I could remember, and with no idea why.

This was my mystery, and with every passing year, the ignorance of my malady made me feel more insane. This winter was the worst of it, and every cold night ended the same way.

By the time I got under the covers at night, I had so much crank running through my bloodstream from snorting shit all day that the best I could hope for was a few hours of quiet while I stared at the walls. There would be no sleep, just the same miserable routine I had been repeating every night.

Once under the covers, I slide my hand under the pillow and wrap it around the grip of the loaded forty-five. Pulling it out, I grab the top slide and rack it back to chamber a round. Clutching it in both hands with my tired finger on the trigger, I stick the barrel in my mouth and fantasize about ring a lead slug out the back of my head. Peace would come easy. A small squeeze away from instant death, and I felt better than I’d felt all day.

It had become such a ritual that the smell of carbon, and taste of gun oil would comfort me.  The thought of killing myself was comforting, and was often the only solution I could imagine, but I knew it was impossible. I knew that I was incapable of doing it, so I would inevitably clear the round out of the chamber, return the gun beneath my pillow, and pull out my notebook. I’d write about the mystery of my madness, and I’d write about how maybe someday, I would be happy.

What got me through those nights was my writing. I wrote hundreds of pages of words into notebooks stained with nervous and desperate sweat. If I had to call them something, I’d call them poems, but they were mostly prayers.

I had exhausted every attempt at self-destruction, and I spent those sleepless nights desperately praying for peace.

I will start from the beginning, when life was perfect, and I became troubled for no apparent reason.

Review of Sex Drugs and Om: An Autobiography of an American Yogi by Jacquie Bullard

How many different kinds of yoga are there these days? If it’s not goat yoga, it’s drunk yoga. Then there’s cat yoga and stoned yoga. What next? I’m not about to suggest sex and drugs yoga (for those of you who sat and thought too hard about the title of the book I’m reviewing here).

Instead, I’d like you to imagine the person in the gripping scene above, which are the first couple of pages from the autobiography. You might wonder, is this a crazy person that the author holds in some kind of enlightened yogic regard, with compassion and peaceful acceptance that everyone is human and everyone suffers? Or is this the yogi himself that the autobiography will introduce to you? Aside from the words ‘peace’ and ‘happy,’ it would be hard to imagine this as the introduction to the autobiography of any yogi – except if you recall that many yogic texts and books on yoga discuss the oh-so-hard endeavor of maintaining a peaceful disposition no matter where you are on the spectrum of pleasure and pain or gain and loss.

If anyone ever complains that yoga is just an airy-fairy trend that is only for people with tight abs, flashy yoga pants, and the mellow patience of a rock, then you can direct them to Greg Reese’s “Sex Drugs and Om: An Autobiography of an American Yogi.”

Raw is the adjective that first comes to mind in describing this book. Reese’s narrative is full of momentum, wit, and sharp honesty. It leaves the most modest person blushing, while the most unabashed person might examine their own drive to seek pleasure and weigh it against the lasting sense of joy that Reese keeps referring to throughout the book.

I know what you might be thinking: I’m just another one of those yoga evangelists who believe that yoga can do everything for everyone. But before you jump to that conclusion, I invite you to consider that there is much more to yoga than the mainstream conceptions that cast it as a feel-good panacea. Seriously, even —or should I say especially— those who are averse to mainstream images of yoga will find some gems in Reese’s autobiography. Okay, maybe you’re not averse to seeing a lovely picture of someone perched in their perfect pigeon pose. But how many of us browse Instagram and see posts proclaiming that yoga is more than just poses even though the picture in the post is of a yoga pose? What about all posts that use #offthemat but still contain standard postures you’d find at a yoga class. If yoga is more than just poses, what is it? Reese provides an answer to this question, but in the context of his story that contains just enough sex, hinted-at violence, and drugs to make readers feel that they are just vegging out on the couch watching their favorite Netflix special.

There’s just enough darkness to make the light in his story shine through in unexpected spots.

In the midst of his dark narrative, Reese reflects on his experiences and how they “…made [him] think that perhaps suffering was not a bad thing. Maybe good and bad were merely illusions, and maybe life was more about learning, than just trying to always feel good.” Think about how you might be motivated to go to yoga class so you can leave with that floaty, on-top-of-the-world feeling; then remember that a lot of times, pain, feeling down, or just feeling out of whack, in general, can be a great stimulus for seeking that yoga high. In this autobiography, Reese brings us with him to his darkest depths and how that pushed him to seek the high vistas and birds-eye perspectives that come along a spiritual path.

Dare I say that this autobiography is somewhat of a cross between Kerouac’s “On the road” and Yogananda’s “Autobiography of a Yogi?” It’s not an exact hybrid, but I do believe that it should be on par with Yogananda’s work on any yogi’s must-read list. Sex Drugs and Om is much more nuanced than On the Road, and much more down to earth than Yogananda’s autobiography. In short, it’s just more enjoyable, compelling, and down-to-earth than either of the two above.

The real charm of Reese’s work is that, indirectly, it brings forth yoga as a practice for anyone —from the most profane to the most sacred. Through this autobiography, he has truly framed yoga as an ancient tradition that has evolved into a modern practice open to everyone, even people who have hit rock bottom. To quote Swami Satchidananda, “Truth is one, paths are many.”

Through his story, Reese seems to be calling out to us, “Hey, let’s ditch that yoga stereotype of the hippie, health-nut, nature freak who professes that everything is all good. The shit is hitting the fan everywhere, all the time, and in fact, that is what propels us towards yoga. And ultimately toward inner peace.”

Sex Drugs and Om is an exemplary work on how each individual yogi finds their path to the light, even if they have to go through the most unimaginable darkness.

You can find Sex Drugs and Om: An Autobiography of an American Yogi on Amazon.