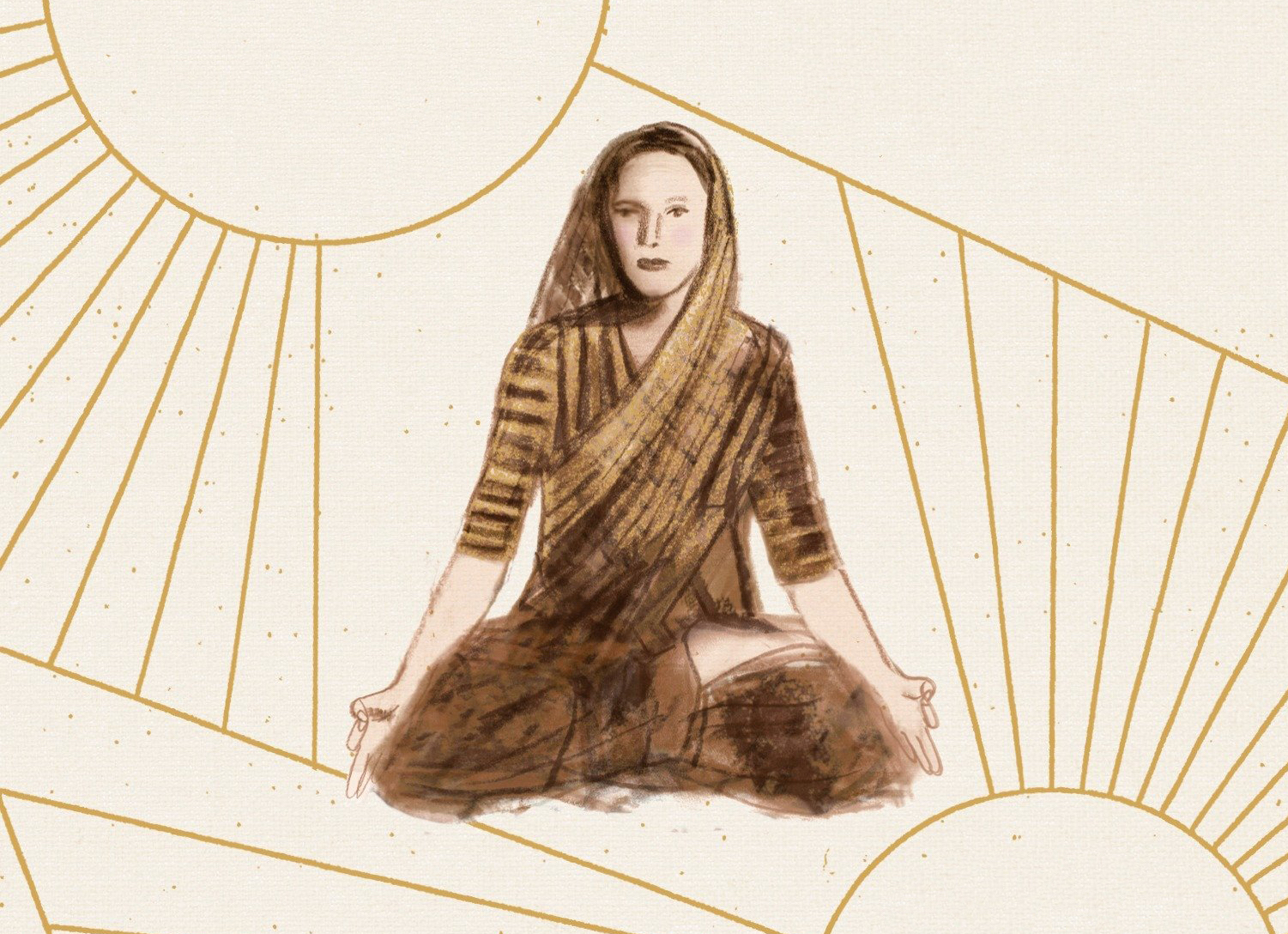 JOIN OUR DISCUSSION CALL ON APRIL 26 AT 8 PM EST, AS WE DISCUSS MICHELLE’S BOOK TOGETHER!

When The Goddess Pose: The Audacious Life of Indra Devi, the Woman Who Helped Bring Yoga to the West was first recommended to me, I’ll admit I had never heard of it but was immediately intrigued. I first learned about Indra Devi in my 200HR teacher training. She was presented as one of the major teachers (and the first woman) responsible for bringing Krishnamacharya’s teachings to the West. I was more than happy to dive into a book about her life to learn more about this mysterious figure who looms large in Western yoga history yet at the same time is rarely mentioned.

Upon reading the introduction, it quickly became very clear that Indra Devi, like almost all yoga figures, was a complicated human being. This knowledge, coupled with my own reactions to learning about Devi’s life, made me realize just how much I desire for yoga teachers—especially the female ones—to be “saintly,” and how such a desire ultimately leads to disappointment.

Although The Goddess Pose is not a book about yoga teachings, per se, it offered plenty of reflective opportunities for me to apply the yogic teachings in my own life.  It also helped me get clearer on how the “industry” of yoga plays a part in my own understanding of the practice. 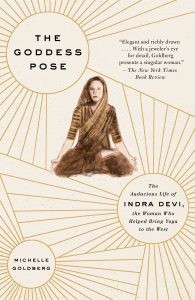 In our contemporary cultural discourse on yoga’s ability (or lack thereof) to be accessible and inclusive, this book struck me as an inadvertently hidden gem. It traces how the yoga that we know today came to be based largely through the lens of Indra Devi’s own perspectives and teachings and how world events of the past century shaped her beliefs. If you were to set this book on your shelf alongside Mark Singleton’s Yoga Body and Stefanie Syman’s The Subtle Body, I think you’d get a pretty good idea of how yoga, as we know it in 2021, came to be (prepare to be disappointed).

Although I personally have not traveled nearly as extensively through different parts of the world as Devi did during her life, I have moved around quite a bit domestically in the United States and have similarly found that different towns and regions of the U.S. have their own distinct cultural undercurrents that have greatly influenced the evolution of my teaching style. This diversity of experience is helpful in developing a more open mind. It’s evident in Devi’s chameleon-like ability to adapt to her surroundings. This ability to let go and adapt also happens to be a key teaching of yoga that I am not nearly as proficient at as Devi but nonetheless continue to work on.

As a closet history buff, I appreciated reading about the waxing and waning of religion and spirituality as a cultural phenomenon outside the U.S. that largely mirrored what was happening in the West as a “countercultural back-to-nature reaction to modern urban life.” Reading about the Lebensreform movement of the 1920s in Weimar, Germany with its emphasis on “bodily purity through diet, rhythmic gymnastics, homeopathic medicine, nudism, and communion with nature” had me thinking about our 21st-century equivalents.

As humans continue to search for meaning and purpose amongst constant (technological) advancements in society, I’m curious how the role of yoga culture will play in the broader historical understanding of our own time. This connection between yoga and culture was even briefly explored as a means for political activism throughout multiple decades and major world events, which brings us back to today’s debate about whether or not yoga is political in the first place.

Certain sentences in the book struck me as massively ironic and an affirmation that history repeats itself. Take this example: “Interest in yoga was growing all over the country, in part because of the mounting concern about the toll that stress was taking on Americans’ health.” The author is writing about the year 1950.

Another key historical point worth highlighting, especially in light of the conversations about inclusivity and accessibility, is driven home in this sentence:

“This is one of the ironies of hatha yoga in America: Rich housewives discovered it well before it became the avant-garde enthusiasm of beats and hippies.”

Indra Devi could never shed her aristocratic Russian upbringing despite enduring extreme hardship, refugee status, and even poverty throughout her life. It appears she was always trying to be important by virtue of surrounding herself with important people despite the fact that she didn’t always have money or fame. This was reflected in her career choices, marriage prospects, and choices for a “guru.” In developing a keen eye for being in the right places with the right people at the right (and opportune) time, Devi advanced her own career and fortunes. She ensured that yoga would be for the rich and famous in the U.S., as evidenced by her decision to settle in Hollywood and attach herself to the celebrity culture of the day. As the author Goldberg notes:

“It was Indra Devi, more than anyone else, who turned a very male discipline into an uplifting ritual for cosmopolitan, spiritual-but-not-religious women.”

At least as a “mainstream” Western phenomenon, yoga has always been presented as a practice for the rich.

This observation plays alongside the obvious exploration of charisma as a key trait for the success of Devi’s yoga teaching career. There are few other explanations for why, in her 80s, she could be found hanging around a Central American military colonel as he attempted to overtake his government with her spiritual guidance. All “celebrity” yoga teachers these days have at least one thing in common and it has nothing to do with their ability to teach, their level of wisdom, or their deep knowledge of the yoga tradition (though some have that too). Devi exuded charisma. It is this same trait of personality—this outwardly projected confidence and ease of being—that attracted people to Devi just as it attracts students to modern teachers today. It was present in all her teachers as well, including Krishnamurti, the Theosophists, and Sai Baba.

Though there is no known evidence of specific fraud or scandal perpetrated by Devi herself—other than the morally reprehensible (in my opinion) decision she made to move her dying husband to a country halfway around the world, then barely care for him while she pursued teaching opportunities—she certainly was surrounded by it all her life. The more I read about yoga and history, the more I become convinced that there is always, eventually and unfortunately, some type of fraud or scandal involved.

Devi’s connection with and devotion to Sai Baba and its organization foreshadowed the same types of relationships devotees of Pattabhi Jois, BKS Iyengar, and many other fallen “gurus” must navigate and reconcile today. In this exploration of relationship, the role of the “guru” in one’s life, and how the teachings of yoga show up in everyday living, the book offers fertile ground for reflection and application of yogic principles.

Because Devi did not leave behind a much-written record of her life that is publicly available and because many years of her life were spent outside in non-English speaking countries, it was a challenging project for the author to piece together a coherent tale of Devi’s life. And that’s before you factor in the inherent instability of Devi’s early life and enigmatic choices that led her on her journey around the world. I got the feeling that a lot of the commentary was interpreted by the author, which was understandably unavoidable.

Although the author is a yoga practitioner herself, I strongly disagreed with her generalization that Patanjali’s yoga philosophy is a philosophy of transcendence that does not work for our modern world (though I admittedly may be in the minority with my interpretation).

Goldberg writes, “The fact that yoga is now seen as a route toward individual development and a more efficacious life in the world is thus a historical irony. Eugenia [Indra Devi’s real name] would play an important role in this conceptual transformation.”

I took issue with the lack of context for this assertion and felt like the author even contradicted herself in other parts of the book when she wrote about how other Indian yoga teachers like Vivekenanda, Kuvalyananda, and even Krishnamacharya built upon ancient teachings to evolve the practice for a modern audience.

In fact, Goldberg even wrote of Indra Devi: “For someone who’d been buffeted by global cataclysm the way she had, part of yoga’s power was its promise of an escape from history, a way to remain impervious to life’s daily chaos and contingency.”

If that’s not an example of how to apply the “transcendental” teachings of yoga, specifically non-attachment and surrender, to living life in the real world, I don’t know what is. The debate around whether or not that’s a fruitful life choice or simply “escapism” is for the book club discussion call! Other than this point of contention on the presentation of yoga philosophy and history, I still enjoyed reading about Indra Devi’s life and contributions to yoga in the West.

This brings us back to the fact that Devi was a complicated human being. In reading this book I got the sense that Devi lived with dueling desires throughout her life, not unlike all of us.

On the one hand, she wanted to live in, be in, and experience the world around her. On the other hand, she recognized the power of the yogic teachings in helping her “escape” the inherent suffering that comes with living in the world. Her whole life was about figuring out how to balance those two impulses and the result was messy at times. Viewed objectively from an outsider, it’s easy to point fingers and label her behavior and choices as “wrong” or “careless.”

But that’s unfair to humans. We’re all just doing the best we can and sometimes it doesn’t make sense. Sometimes we make mistakes. Sometimes what we do when we do it doesn’t age well. I took solace in recognizing the humanness of Devi’s journey, perhaps because it helped me see the humanness in me and inspired me to keep living a yogic life the best I can within the context of the world I live in.

This review is part of our SU&Y Book Club hosted by Ashley Zuberi.

You can buy The Goddess Pose by Michelle Goldberg on Amazon & review it on Goodreads.