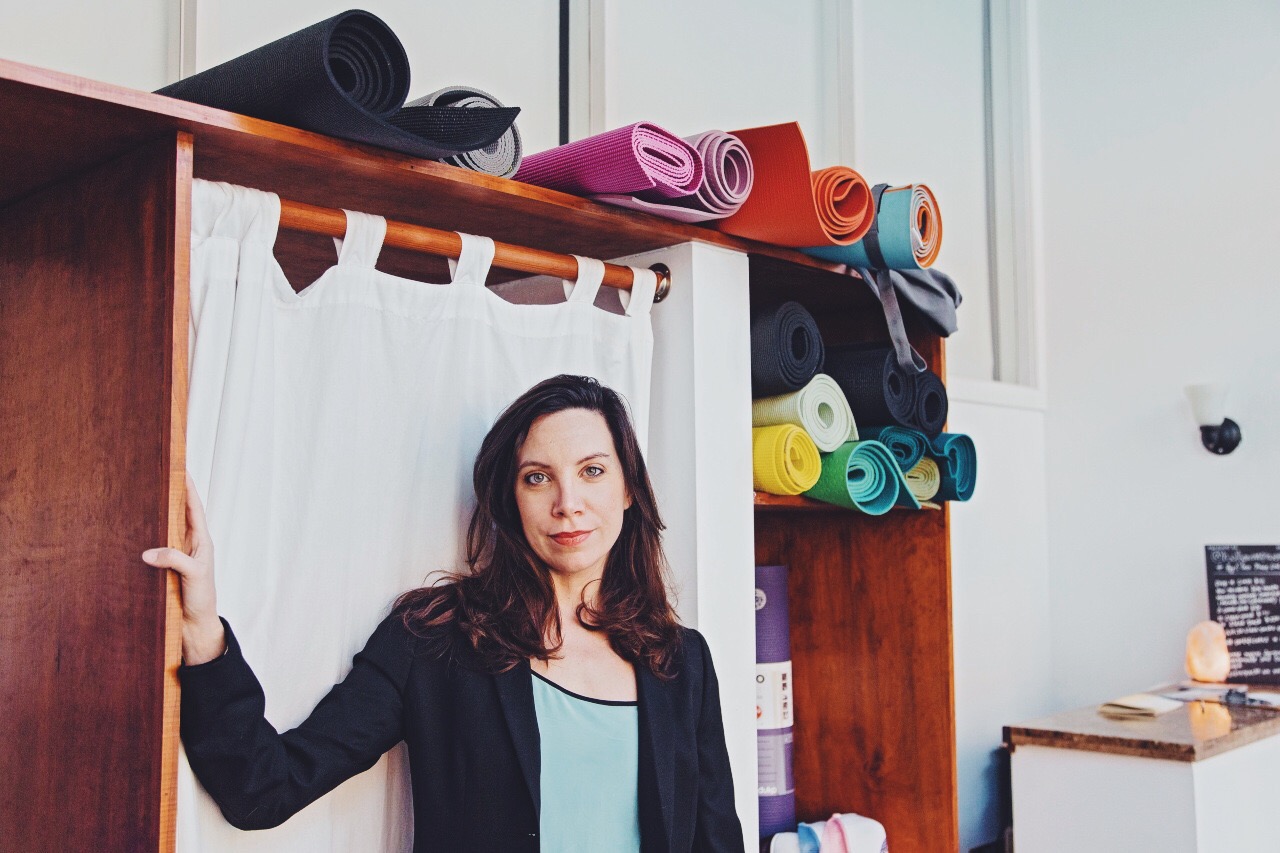 Summer Chastant talks about her alter ego, “build it yourself” mentality and making it as a yoga teacher in a big city.

Watch the trailer for web series that shook up the online yoga community.

How did you come up with the idea of Namaste Bitches?

I came up with the idea for Namaste, Bitches while on the subway commuting between classes I was teaching in NYC at the time.

You are both the lead actress and inspiration behind Sabine’s character. How much do you identify with Sabine?

Sabine is a much more impulsive and less predictable version of myself. I actually came up with her name while I was leading a yoga retreat in Italy. I was with a group of students talking about funny yoga moments and how it would be funny if my yoga teacher name was some alter ego version of myself named Sabine. I’m sure the folks who were at the table remember that story. We all had some good laughs over it.

What are some of the choices you’ve made that made you who you are?

I would definitely say all of the struggles that I’ve gone through in my life have influenced me to write dark comedy. Being poor and awkward growing up definitely sparked a desire to make people laugh and caused me to develop a unique perspective and sense of humour. Also, I learned from a very early age a “build it yourself” mentality. Also, I worked really hard to make it in NYC as a successful yoga teacher. So, when I moved to LA three years ago and started Namaste I just stuck with the same mentality and used everything I had learned from creating a career out of teaching yoga. I have to remind myself each day that nothing good comes fast or easy.

They do in the sense that they are all human. It’s important for me to show that all of the teachers have their own flaws. And they all struggle with personal flaws and the inherent conflict of making money from something spiritual.

Did you have particular people in mind while creating these characters?

I write exaggerations based on life experiences that I’ve had. The characters are reminiscent of people that I know but I also had the actors I wanted to use in mind and wrote for their alter egos.

What do you think about teachers using social media to brand themselves?

It’s such an interesting conundrum, both the branding and the use of social media, as a yoga teacher. Like in the series, I think it’s a discussion teachers are constantly having and trying to figure out. Social media and branding are a part of every business. If you’re teaching yoga, that’s your business. It’s inevitable that you use the tools to make your business thrive.

Does a teacher need to have an advanced asana practice to get a loyal student following?

I think with both good storytelling and good yoga teaching we ultimately are drawn to authenticity.

Pay attention to the local teachers who resonate with you. Take classes from your local studios and not only the big corporations who claim to have the big names. That’s where an individual may find an underrated yoga instructor that speaks personally to them and what they are looking for in a teacher. Shout out to the studio that gave me my start, YogaSole in Brooklyn. They took a chance and hired me when I had zero teaching experience. I am forever grateful for the time I spent there in that close community.

What is your favourite Sanskrit word and what does it mean?

Savasana. It means corpse pose. We all need to take breaks and lie down more often.

What inspired the use of rap music in a series about yoga? Who are your favourite rappers?

I started DJing (with vinyl) at the age of eighteen. I’ve been a huge fan of rap music and that was what I first learned to spin. I payed a lot of bills Djing for clubs and events all over the US. Music and how it sets the tone is a huge part of how I think when I create experiences. It was a part of the reason students loved my classes when I was teaching. Being versed in music theory is confluent to being a successful comedy writer. It’s very clear when something is rhythmically off. Also, I liked the use use of rap music to ground the female driven content.

You moved to Los Angeles after teaching yoga in some of the best studios in New York. Is yoga on the west coast different from the east coast?

I think the difference in geography affects the way classes are taught in both cities. I feel like the streets of NYC are so crowded and people are always so close in space on the subway that translates to yoga being a bit more detail oriented with cueing. Also, New Yorkers walk so much that by the time they get to on their mat they aren’t so concerned with getting a workout.

In Los Angeles people spend a lot of time sitting and driving in their cars so it seems appropriate that the classes lean towards more flow and even market towards the physical element.

Corporate studios or neighbourhood boutiques? Why?

I’ve taught for both and I’ve practiced at both. I think people should practice at the studio that has the most teachers that resonate with their needs.

What’s your advice to recent graduates trying to make it as instructors in a big city?  Do you recall any misadventures when you were starting out?

My advice to recent graduated is to find a studio where you absolutely love to practice and where you feel like you are encouraged to grow. Study and also try to find places to teach as much as possible. Like with anything teaching requires practice. And practice is essential to finding your voice.

I had some really great advice early on that helped me. It was to not add in any dharma teaching until it came out of your mouth organically and directly from your soul.

What is the worst advice you see or hear given in your area of expertise?

I think it’s a trap for new teachers to get caught up in anything that is leading with brand bravado. Especially if the company or person isn’t paying you or treating you well.

What are three people or sources you’ve learned from – or followed closely – in the last year?

My “go to” yoga teachers (the ones who not only provide nourishing classes but who I call on the phone for life advice or anything and everything) are:

If you can, study with them. They know what they are doing.

What are you working on right now? When can we expect Season #2?