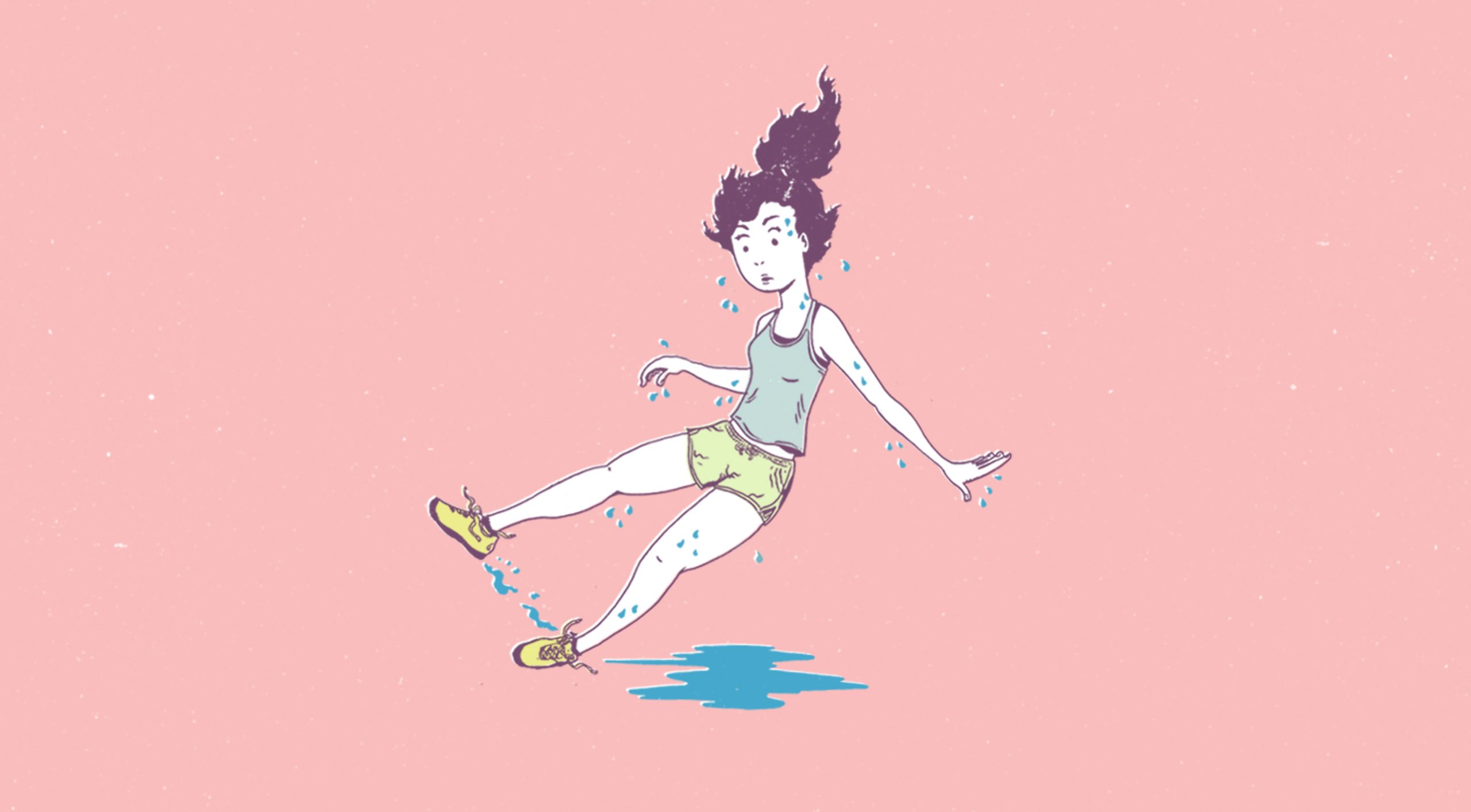 Why I Hate Hot Yoga, and So Can You

“Do you teach hot yoga?” the voice on the phone asked.

“Yes…” I began to answer before being quickly interrupted by a “Dewey Cox moment.” My entire yoga life flashed before my eyes.

I tried to make sense of my existence; who AM I, why am I here? How did I become a person who teaches hot yoga? I hate hot yoga.

Kinda, but not really.

Several years ago, after an on again, off again, yoga practice, I jumped back into yoga, hard. A full commitment to daily practice, and the twinkle in my eyes set on becoming a teacher, if I didn’t bail on myself. My home practice was not enough for me anymore, and the local gym classes were good, but I needed more. So, I signed up for a trial week at a local hot yoga studio. After much internal debate and struggle, I had decided that I was ready for this newfangled hot yoga stuff. This is where it gets cloudy.

I am perhaps the sweatiest person on the planet. My pores are open AF, ruining many a cute dress or button-down, business-only shirt, from the armpits out. This body betrayal, touted by experts as TOTALLY healthy, was really effing gross. Therefore, many of my fitness choices were a direct result of concealing my glistening self… as in, if I do not do the fitness, I do not get the downpour. Thanks to the magic of yoga, that aversion no longer mattered: I had decided to step into my first yoga studio, take my first hot yoga class, and handle my shit (well, my sweat) like a pro.

Narrator: she did not handle her shit or her sweat like a pro.

First, I entered the studio carrying a Pilates mat that I had been using at home for Yin and restorative yoga.

Upon consulting with the (politely snickering, 20 years younger) yoga instructor, I borrowed a studio mat and purchased the most expensive towel in the universe from the handy hot yoga retail boutique.

Armed with only my water bottle and tiny hand towel, I set up my mat, rolled out the million dollar towel, and did what yogis do… I began to breathe.

That was a mistake because instantly, my new purchase fulfilled its dharma. I already felt I was overheating from just walking into the room and sitting down. There I was, fidgeting, waiting for the class to start so that I could die properly. What the hell was I thinking?

I wasn’t thinking; the yoga had taken over. In that hour, I sweated, I bent, I flew, I flowed.

I learned that I have a BLOOP via hot yoga… a moment when I just seemed to magically pop into Wheel pose or Half Moon. BLOOP, I was there.

I caught a glimpse of my beet red face after class and laughed. I bought headwraps to corral the sweat. Leaving that studio, I declared that I was warm on hot yoga. BLOOP.

Fast forward a week or so, and I was in a different, newly opened yoga studio. This one had a different vibe, entirely, with positive affirmations on the freshly painted wall that, in hindsight,  should have screamed to me to run away. Instead, I stayed, because nothing made sense except DOING hot yoga.

Hot yoga seemed to be the key to fixing an issue I was having with my rotator cuff. It did feel good once all of the movement has ceased, kind of like what you feel when leaving the dentist. Hot yoga also became challenging in uncomfortable ways. In one week, and in two different hot yoga classes, I got so dizzy; I almost passed out. I asked my teacher why hot yoga was so difficult for me, especially considering how much I was practicing yoga, and taking other fitness classes, too. The answer I got was that it was my ego.

My ego made me dizzy in dancer pose after 40 minutes of power vinyasa yoga in a 90+ degree room. Of course.

Still, I pressed on (egoless, of course), and eventually decided to pass on the experience and go back to regular, less sweaty yoga.

Narrator: she did not pass on hot yoga.

I “hated” hot yoga so much that I enrolled in, and completed, a yoga teacher training program where I learned to teach vinyasa flow and slow flow/power yoga… in a heated room. How did that happen? I like to believe the Universe tricked me into teaching something that would be the death of me.

While torturing myself, I discovered that even after three to five hot yoga classes per week, I would always, always, always get dizzy at one point during a class. I am not a delicate flower, and I am also not a masochist. I had spent a lot of money on yoga teacher training, and I was determined to learn how to BE in hot yoga. For me, that meant:

The day I was told it was my ego that made hot yoga difficult, I wiped the sweat and tears from my eyes and turned to The Great Google for comfort and information. I wanted to know why I was dizzy, and also why savasana felt so much better after hot yoga. Here’s what I learned:

Heat also increases blood flow to ligaments and tendons, so we feel more flexible. Those structures have very little flex, no matter how much we may feel a new centimeter of opening. Simply sitting in a heated room or infrared sauna at 90-110 degrees will have the benefit for your body.

The combination of external heat of the room and the internal heat that generates during hot yoga is the reason why you collapse on your mat in savasana.

That is also why you pick up your mat and head out of the class within 10 minutes. If you sat in a room, practicing Ujjayi breathing for any length of time, you would build heat. Add asana and movement to that breath while in a room with an external heat source, dozens of other heated people, and minimal airflow, it can be challenging for even the fittest person, mentally and physically.

Not everyone, no matter how much they try, can completely adapt to those circumstances.

Still, we pile ourselves onto mats that are two inches apart, avoid sticking our noses in our neighbor’s’ hoohaas and dangling participles when folding forward and halfway lifting, and we sweat. INTENTIONALLY.

On the plus side, a hot yoga savasana feels amazing… and there is evidence that the heat does ramp up metabolism, while reducing fat and LDL “bad” cholesterol.

“I’m ready,”  I said, taking a deep, yogic breath (pause at the top) to bring me out of my Cox moment.

I don’t actually hate hot yoga, but there is a lot of misinformation out there, like how hot yoga is “better” yoga, or what a hot yoga class should be. There is no standard for “hot yoga,” just different styles of yoga that are taught in rooms at higher temperatures. Theoretically, sure, hot classes make us feel more accomplished. Realistically, that is just a lot of hot air.

For my students who want hot yoga, safety is the top concern. If you need to stop and rest, then do that. Drink some water. If you need to leave the room, go catch your breath. Chill in child’s pose. There are no rules in hot yoga, so it is your practice, your body, and your choice. Always.

Its okay to hate hot yoga. Not everyone likes Game of Thrones or pineapple on their pizza, either. Yoga is about accepting where we are and not competing, even against ourselves. You do you, sticky-steamy or not, and enjoy the savasana of your dreams. 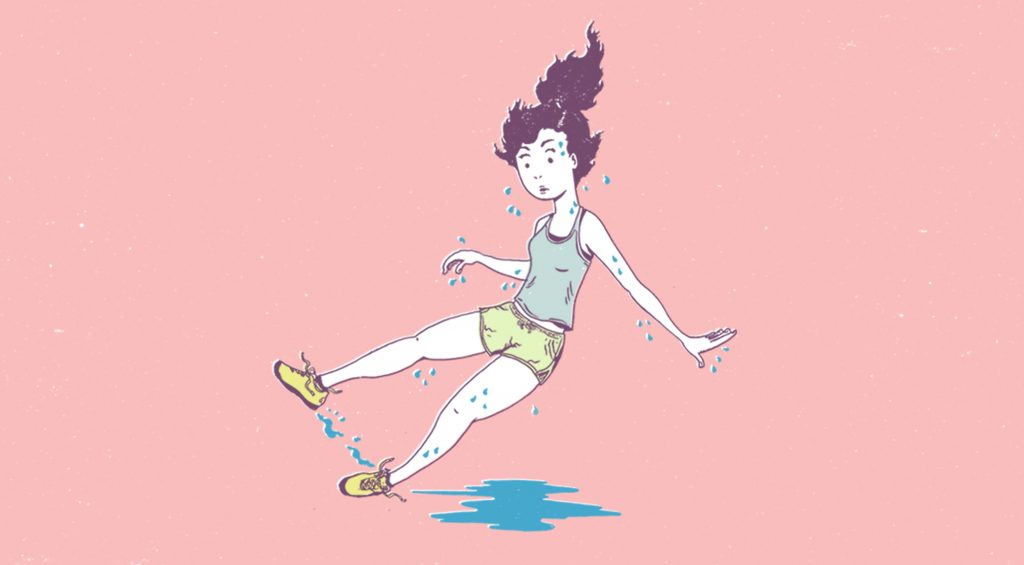