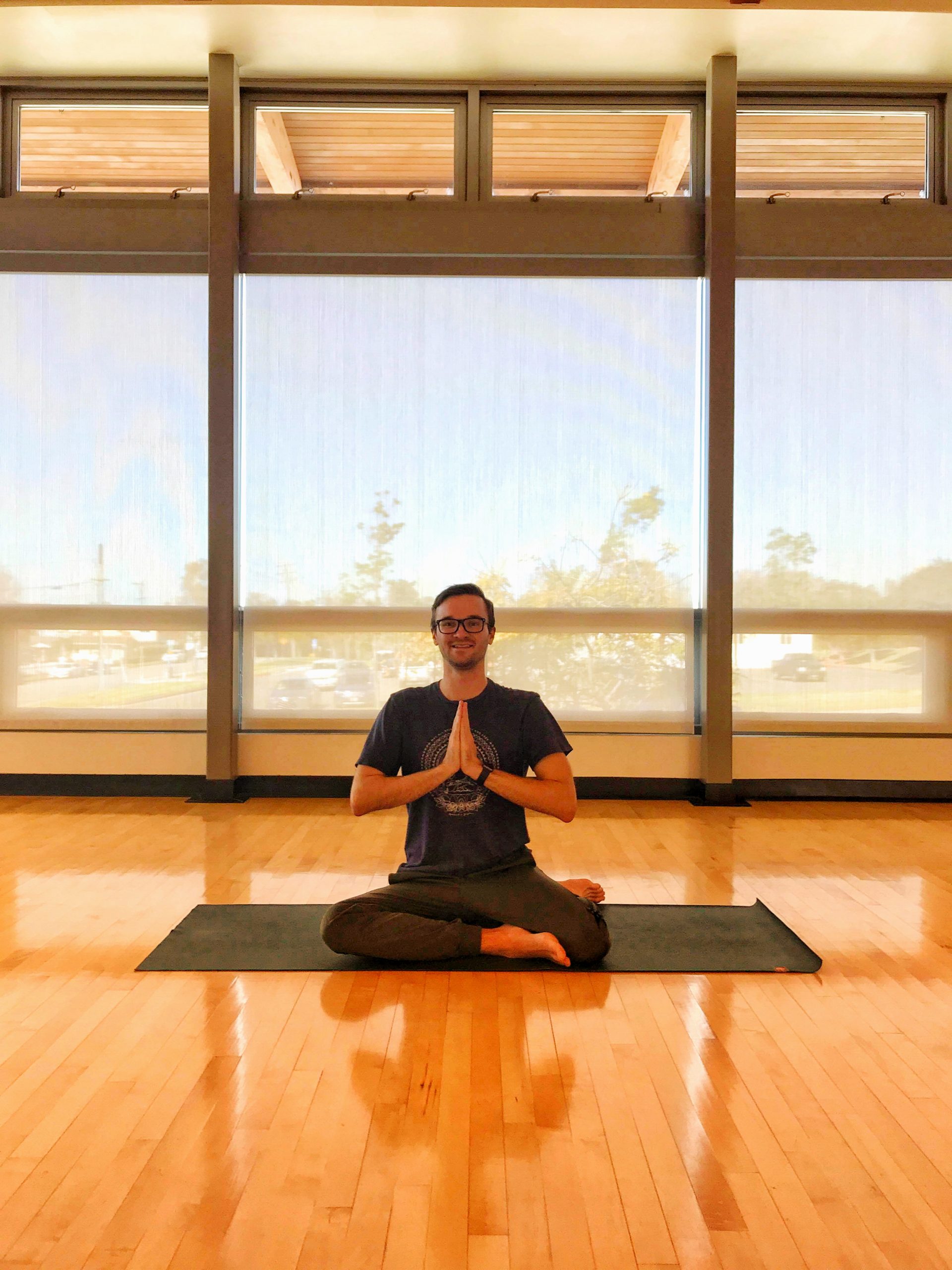 What happens when a yoga teacher has a rare opportunity to travel the world with no pressure to be anything but a student? No concern about classes to fill, no frustration over needing to teach the way the studio owner wants, lots of time to practice on and off the mat, and a completely fresh new slate to learn about Yoga itself!

Julie Tran, the founder of Rogue Yogi®, was teaching Power Yoga and Dynamic Vinyasa classes for a few years before she started to become repetitively injured during her own practice. She also observed many yoga teachers, fresh out of teacher training, that were leading large-sized classes with little anatomy awareness and following the same sequences over and over.

One thing led to another, and she soon began to question why some things were taught and why there wasn’t as much anatomical science education as the amount of flowery words that made people “feel good” in class.

What about the people who were far more injured than her? How could they practice yoga in a safe manner? What would really help people develop a peaceful mindset, self-awareness and gain the tools to keep their bodies as healthy as possible in the long run?

She eventually discovered an amazing community of advanced yoga teachers who had been bridging the gap between the old-school/traditional thinking and the modern science in amazing ways. The student in her got excited AF to have the opportunity to pick their brains and see just how these folks were paving the way for students to start asking the right questions and develop a positive relationship with their minds and bodies.

Formerly known as “Science Yoga Sundays”, this video-cast series “open it up” for yoga teachers to freely speak their minds, share their sentiments and let everyone in on the things that are rarely talked about in the studio setting.

NOTE: Some of the content here may contradict what your favorite yoga teacher is saying. There are no right or wrong answers here–it’s just a lot of passionate people with the best knowledge they have at the moment.

Intended to be educational, candid and “humerus” at the same damn time.

This video-cast features a major contributor to Shut Up & Yoga! Not only has he provided a wealth of insight on functional anatomy to our readers here (a la “Most Common Yoga Injuries” Part I-IV), he has also helped grow the depth of anatomy education in a few mainstream yoga studio chains in North America. This interview was a solid opportunity to let our readers know a little more about this helpful guy.

Committed to preventing injury and empowering yoga teachers everywhere, Dr. Garrett Neill (aka Yogi Gare) sits down with me to: 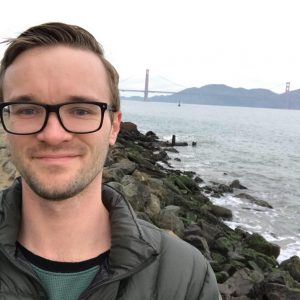 As some of you may know: there’s a “traditional” side of yoga, but there’s also a “modern science” aspect, too. Some of us are bridging the gap between the two, so we can have a life-long healthy practice. It’s kind of “underground” right now, because of the major dedication to the traditional. The more science we know the more we can really enjoy the yoga practice in a safe way.

On Garrett’s History with Yoga and Becoming a Chiro

GARRETT: I’ve been a chiropractor for almost 2 years, and I’ve been doing yoga for over 12 years. Halfway through this time period, I took yoga more seriously. As a certified teacher, I really like having my foot in both of these worlds.

Being a chiropractor, I get to be in the exercise science world. Being a yoga teacher, I get to see the tradition and hear the things that some people say. So, being able to blend both has been my niche. It’s been so much fun weaving in movement that we wouldn’t call “traditional yoga”.

Someone might look that and say “That’s not yoga!” But, is that person an expert on yoga? Is he/she Krishnamacharya [the “godfather” of modern-day vinyasas]? People are mindful, people are breathing, people are having fun. Science has been able to show that you can make almost anything mindful! Almost anything can be yoga if you’re being in the moment, doing it mindfully and with non-judgment.

How Yogi Gare Got Into Yoga in the First Place

GARRETT: I was a competitive swimmer in high school. As in swimming 10,000 yards a day. With all that overhead activity, I almost destroyed my shoulders. I got to a point where I was like a T-Rex. I couldn’t even lift my arms up and it was horrible.

My coach’s sister-in-law was a pilates teacher. I cross-trained with pilates, and my shoulders got much better, but, pilates is kind of expensive!

My swim coach was like, ‘OK, now you should try yoga”. I thought, “Ha! Yoga’s for girls. I’m not gonna do yoga!” However, this was one of the hardest things I’ve ever done in my life. I was sweating profusely from every pore in my body. What was this practice? I got so addicted to it because It was like swimming. My mind was in it, my body was in it, and I had connected everything together or “yoked” them as we commonly say in yoga.

I came to yoga as a way to better my body because I was repeating a pattern that was not functional.

On What’s Causing Injuries in Yoga

JULIE: The one sentence you said that struck me the hardest was, “Hip replacement at age 30. That’s such a young age. When I hear “hip replacement”, I think of someone in their late 70s. To hear things like that happening, it makes me afraid to practice something like Lotus Pose.

GARRETT: It’s not something that gets talked about a lot. Yoga, in itself, is kind of a healthy practice. In yoga, we also like to talk a lot about the light, or positivity, of things. And when injuries start to drip in, we disassociate them. We’re like… Oh, that wasn’t Yoga that hurt my hip. I was out gardening today, and I probably squat weird and pinched my hip pulling weeds in my garden. When in fact, you just kept your knees super locked out when you forward folded or pulled your hamstrings and really aggravated things. 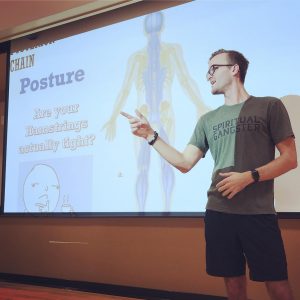 Sometimes, we just don’t know that yoga could be the cause of this pain. The extreme movements, but also the repetitive nature of some of those movements and not listening to your body is probably the biggest thing. If you’re doing something that’s painful, don’t do it. Or modify so that it doesn’t hurt.

Pain is your brain telling you, “Hey, something is wrong. Please change it. Pain is a signal for change.”–Garrett Neill

SO, WHAT IS THE DEAL WITH “HIP OPENERS?”

GARRETT: “Physically open” is what we refer to when we talk about “hip opening”. That’s like your “Figure 4” position, or what you would see in a “wide-legged forward fold”.

A good classic example would be Tree Pose, with the lifted leg doing flexion, abduction and external rotation. We can all agree that’s what most people think. A pose like “Supta Baddha Konasana/Reclining Bound Angle Pose” is also an excellent example of that.

What’s really interesting is that there are not a lot of yoga poses that provide these types of movement.

We have a lot of imbalance when it comes to hip flexion. There are so many poses that do hip FLEXION, but not a lot of poses with hip EXTENSION. With the poses where we do have it, usually, we’re going super deep like Crescent Lunge and Anjaneyasana.

Finding specific internal rotation can be more than beneficial when it comes to mobility gains. The reason for this is developmental anatomy.

When we look at how the body develops (back when we were a fetus in the belly of our moms) we started off as one cell. In that first 4-8 week period, we form these things called “limb buds” which are tiny little stumps.

The way that they form is very interesting. They kind of open up. Shoulders will open to external rotation. They start internally towards the chest. As you’re developing, they unfold and become external.

The hips are the opposite. They start in the “wide” position. Another good way to describe it, which I also find is pretty funny, is like “man-spreading”. That’s a huge trending topic right now (i.e. a guy sits down on a bus and sets his legs out really wide. Now, you’re really uncomfortable, because you now have to sit really small!)

So, as a fetus, you start off in that position like in Horse Pose (knees wide, feet in). But, as we develop, the knees internally rotate. That’s the plane that they end up in. And the first motion your brain will lock down with the hips is internal rotation.

What we find now in restoring internal rotation, especially as manual therapists, we get the best mobility gains. You will find how cool it is to see that almost everything improves.

Can’t bring your knee out a lot today? Feeling tight? Well, do the opposite, put some internal rotation in. You might find that your knee opens up. It’s really cool what can happen in terms of mobility gains.

That’s because this is the first movement that your brain learned.

We have all these people with tight Iliotibial (IT) bands. A lot of times, sitting puts it in a state where it’s stuck being lengthened for awhile. Then, you’re going into all these “hip openers”, where your knees are going out Supta Baddha-style, and you’re making them concentric (short). But, we’re never putting them into a fully eccentric state (long).

Eccentric (lengthening) does NOT mean relaxation.

I’ve seen so many teachers say, “Ok, now open up and RELAX”. That’s NOT quite what’s going on. You are never really relaxed.

Finding that bit of tension is allowing that motion to be controlled.

What poses do this?

There’s not a lot.

We have Warrior I as a common one where you’re spinning your back leg in. That’s hard. I don’t know if you remember your first yoga class, but did you understand that concept? I doubt it. Even to this day, it’s hard to do. It’s a strange position to do that with your back leg.

The other one would be Pigeon Pose. The back leg is also capable of spiraling in a bit for internal rotation, and that can be a really good adjunct for Kapotasana.

Incorporating more internal rotation, especially as a warm-up, can make a difference when it comes to what we perceive as hip opening or gaining mobility in yoga.

A lot of yoga, when we look back in the past, was created in the 1930s for slender Indian boys. And now we’re applying it to modern humans that sit all day. These guys are not the same. Our anatomy is different from their anatomy. Your anatomy is different from my anatomy and we have to do something that’s more accessible. We have to be able to modify poses to accommodate modern people.

We have to realize that you might not be able to activate internal rotation in some of the traditional poses. You have to find a way to incorporate it in a way that’s easier (like the warm-up).

Here are some of Garrett’s favorite poses that do internal rotation:

You can settle into internal rotation. You can start that unlocking procedure and tell your brain, “Hey, I’m going to be moving my hips today, and the most beneficial move I can make is internal rotation in the beginning. Let’s put that in there so that I have my full range. I’m safely engaged”.

For the entire conversation including anatomy visuals and kitty cameos, watch the videocast below: