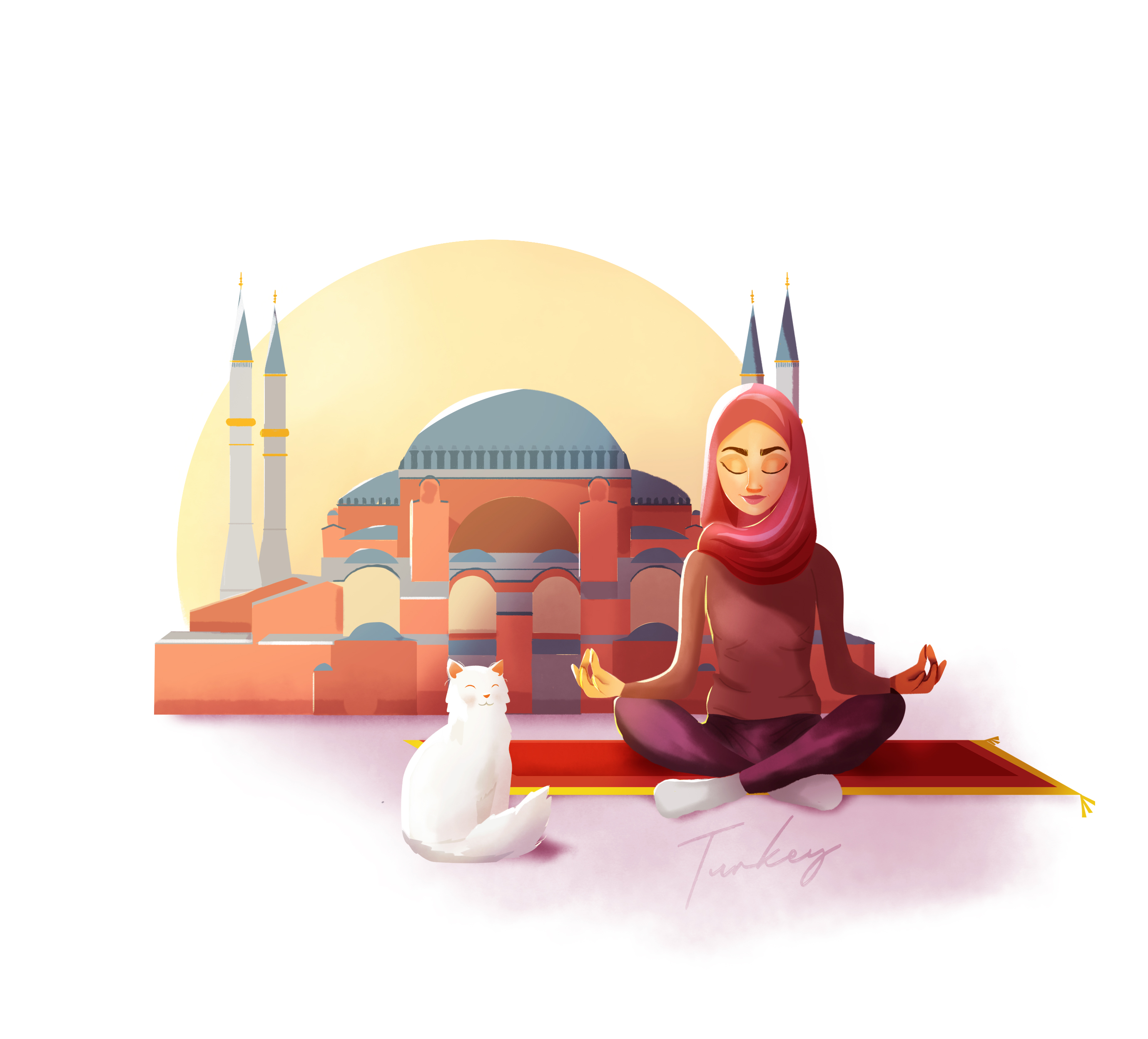 Rogue Yogi on the Road: Yoga and Wild Cats in Istanbul, Turkey

Istanbul is a wildly diverse city. Architecturally, it’s got a lot of old-style buildings. When you take in the view, you can gaze at the low-peaked hills. Across the horizon is an accent of dome-shaped mosques and tall, stately-peaked pole tips called “minarets”. That’s how you know you’re in a unique place.

Add to the picture a wide network of cobblestone paths. Some walkways are very steep, so you are guaranteed a good leg workout. Aromas of spices, arrays of red carpet shops and stringed bağlama music fill the senses. With this impression, everything feels like a time-warp back to the era of Rumi and his lineage of Whirling Dervishes.

Young adult men standing at highly-frequented tourist spots like the Hagia Sophia, the Blue Mosque, and around the Turkish Tea shops yelled out, “My friend! How about my red carpet shop?!” (Including a guy that looked eerily similar to the same one many years ago that led my now-husband and his friend into a bar full of pretty women and burly bouncers suddenly demanding a LOT of money).

Sure, some taxi drivers didn’t have their meters on and charged us a little bit more than they should have. They were few and far between the ones whose meters were working just fine. Yes, restaurant waiters were constantly vying for our business after hearing us say “HAYIR” (which means “no” in Turkish”). After saying “no” several more times, it became clear that they could not and would not hear it. The best response as we moved forward was no response at all.

But, as we continued to explore Istanbul, we began to meet genuinely friendly locals and enjoyed great food (that were out of the way of tourist traps). There was a counter-vibe to the first impression. You just had to see how life was moving between these rustic and cream-colored bricks. Rooftops were blasting deep house music, fences were plastered with flyers for outdoor jazz festivals, electronic music festivals and illustrated cats.

Ah, the kitties. You cannot believe how many wonderful and fuzzy kitties roam the streets of Istanbul. This city adores cats (affectionately called “kedi” and “kediler” for the plural cuteness in Turkish), provides outdoor cat houses, piles of kibble and an abundance of large gallon-sized plastic bottles cut open as fresh water bowls.

Cats rule everything around us here. Most of them aren’t kept indoors because their free-spirited nature grants them the keys to go anywhere and everywhere as they please.

They appear as guest musicians on album covers, are featured in documentaries and sung about in several modern Turkish tracks. There are even entire university wards dedicated to protecting the livelihood of the iconic Turkish cat: the Turkish Van (an all-white cat with one green and one blue eye just like our kedi Bowie). Ah…kitties…

But, this article is about Yoga, so let’s talk about what the yoga scene is like here. In short, it’s as modern as any other Westernized yoga scene I’ve been to. First off was Cihangir Yoga. On the walls of the lobby were advertisement posters of a guy doing an extremely difficult arm balance in the middle of what appeared to be a train station. He was wearing just pants and had tattoos all over his arms.

I recognized his face and his name. Dylan Werner. I met him when I used to live in Redondo Beach, California! Back when he was just starting out, he was teaching yoga at a nearby Crossfit location with my then-roommate. It’s crazy that his teaching/practice became so popular over the years that I see his image on the other side of the world. The guy is superhuman.

After feeling amused at how small this world was, I set foot into the yoga space. Adorned with a tiny Buddha statue, the room was lined with big bolsters, yoga mats, and blocks. It looked like any other modern yoga studio typically found in the US. With floor-to-ceiling windows, so much sunshine beamed into the space.

This was a Yin Yoga class. It was the teacher’s first time, but she taught it as an actual Yin class. It wasn’t a Restorative session (which I had experienced several times with teachers having us rest on bolsters and blankets). This Yin class actually had a focus on applying gentle amounts of stress onto the ligaments, tendons, and fascia.

The session felt relaxing… until a loud billowy voice suddenly boomed from the nearby loudspeakers. It was time for the Muslim Prayer Call, one of 6 in a 24-hour period.

According to the tenets of Islam, the passionate and melodic singing is a reminder of Allah. It’s six opportunities to ask for His forgiveness. Six opportunities, seven days a week. Allah all day, every day. Even when we’re on our mats trying to take care of ourselves.

It was so moving that I had to cry. No, I’m kidding. I had severe allergies and had to blow my nose. At least that was what I kept insisting when the teacher checked up on me.

Next up was YogaŞala (In Turkey, a normal “s” is pronounced like “see” or “say”. An “Ş” is pronounced like “she” or “shoo”). The hubby and I got there early, which meant it was an opportunity to chill out in their relaxation room. With walls of mauve and a giant banner detailing the chakras, throw pillows bordered the bottom edges of the smooth bamboo-like floor. There was already a group in there, chit-chatting and scrolling their phones.

Even in Turkey, people were craning their necks to look down at their phones. Being the observer, I noticed something really silly–nearly everyone was slouching so hard. In fact, it’s happening in every single country I had visited. Just a sign of the digital times, I suppose. Anyone who works at a desk, sits a lot and has a smartphone can be prone to poor posture.

This class was so full that the studio was filled mat-to-mat, with several students having to re-orient theirs to fit into random spaces. Our instructor didn’t have any room to walk around and check students thoroughly. She was bound to her mat, demonstrating most of her sequence and tip-toeing between students.

She had us doing slowed-down Sun Salutations before getting into some Yin poses. When I asked her why she did that (in my broken Turkish), she explained (in her broken English) that it was the Summertime and the weather was quite warm. This was a first for me, though I know there’s blends of Yin and Yang in many classes. I would say “It’s all Greek to me”, but given the history between the two countries, it was better to say “Om Shanti” and peace out.

As westernized as the yoga scene is here, the cuisine, fortunately, is not. In Turkey, if you see an item on a menu, and the vegetable involved is out of season, you will not get to order that meal. That’s fresh. Literally. So, “seasonal” is taken seriously here. This style works for us, as we got to enjoy a kick-ass assortment of vegetables such as diced onions, leafy greens, parsley, diced lemons, pickled chilis and many more small side dishes called “mezes”. 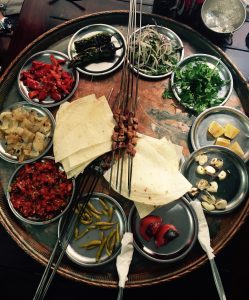 Skewers are one of the main entrees you’ll see. At Biliçe Kebap, we couldn’t help but stop by here FREQUENTLY. With a quick glance, you may not notice this hole-in-the-wall, but if you stop to peek inside you will see just a few tables graced with these large round serving trays (called a “sini”).

With this restaurant’s main wall adorned with monetary bills from all around the world, you will realize that this is a hot spot.

Vegetarian and vegan yogis, have no fear–for mercimek köfte is here! Made of minced red lentils, spring onions and tomato paste, you’ll have to be sure you don’t confuse it for the meat version!

You can have it in a wrap, in veggie ball form, or with lettuce leaves as the wrap. We had such delicious ones at Serince Cig Kofte (There are many, but we went to the one addressed below):

One thing to note is the difference in pricing for food and for yoga:

To get a taste of the many other beautiful landscapes of Turkey, check this video out. It’s called “Two Minutes of Turkiye”. 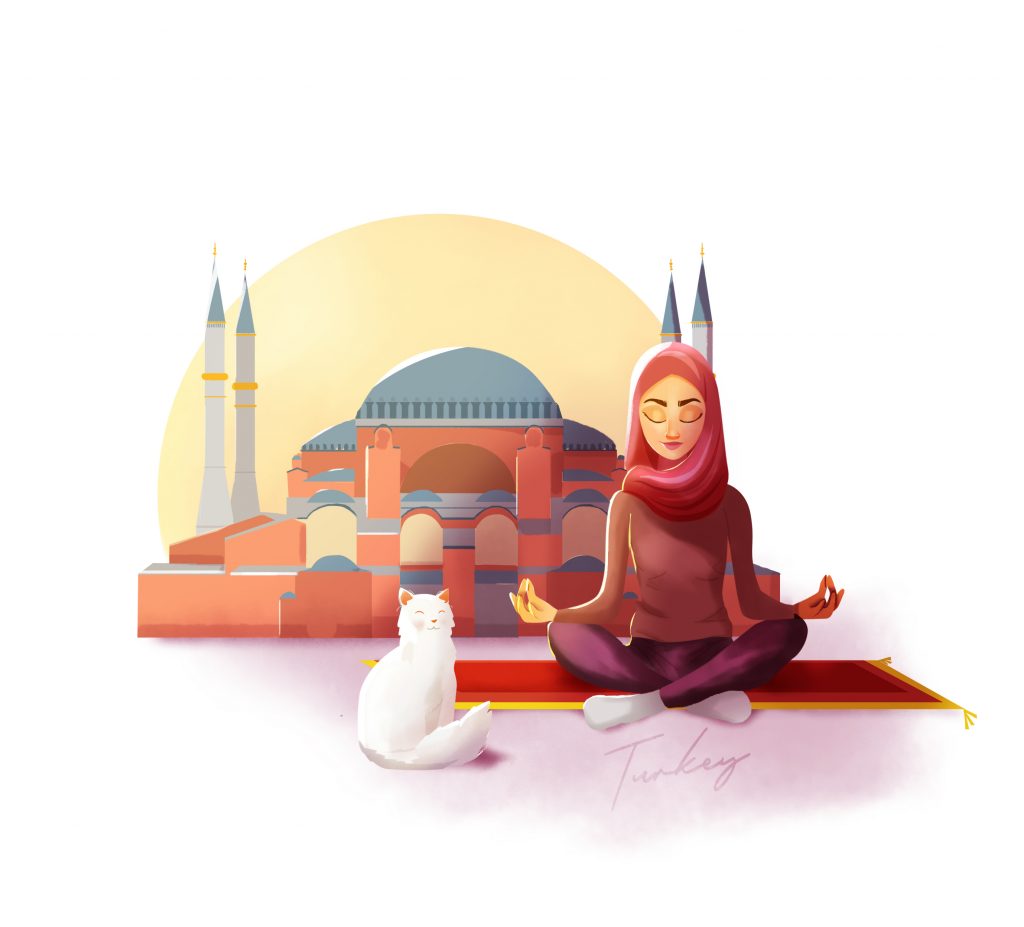