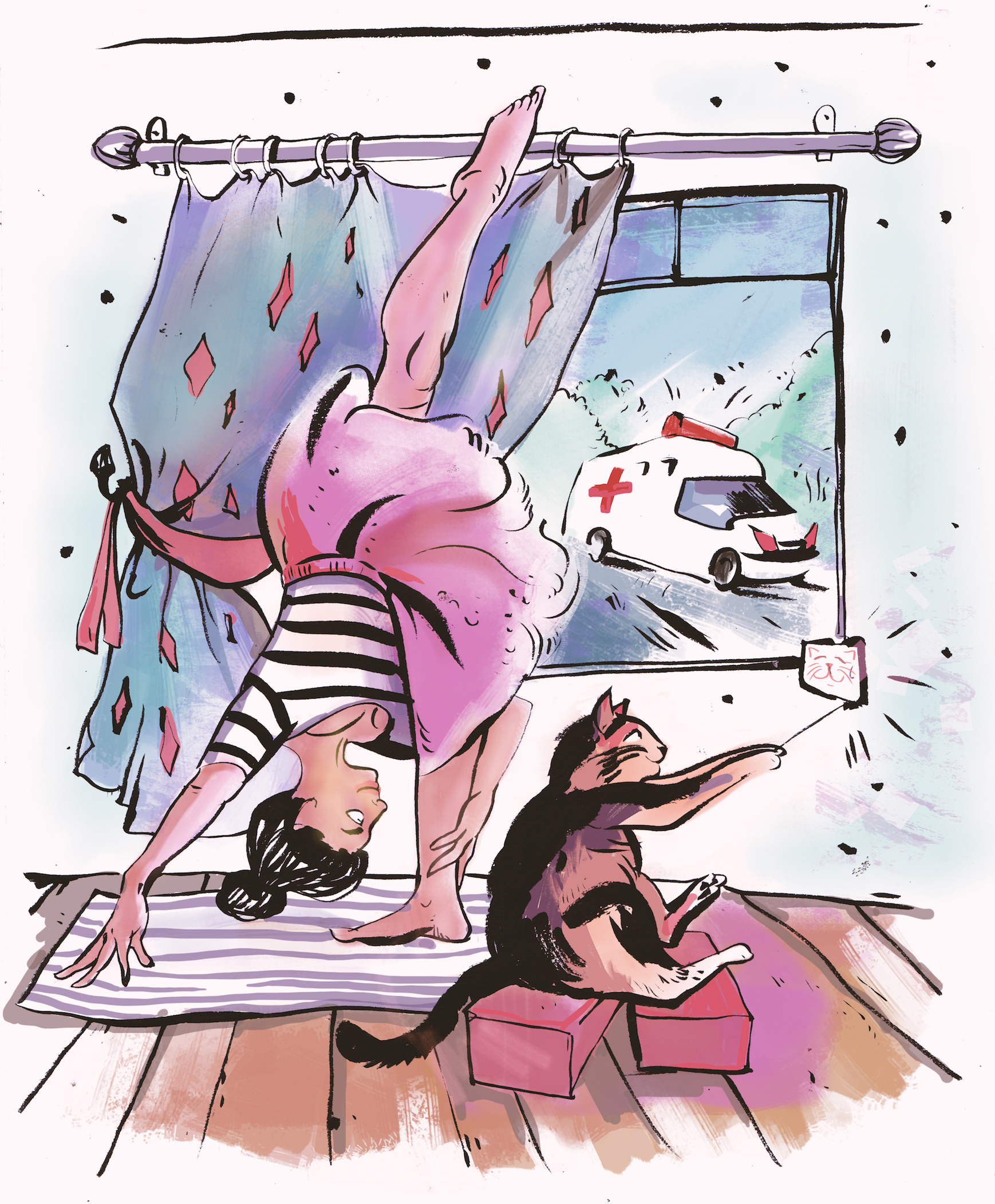 The Danger Beyond the Edge — Injuries, Wisdom, and the Power of No

For yogis, the asana studio is our greatest refuge in life. But we all have that voice in the back of our minds that whispers to us as we find our spot and roll out our mats: Is this the day that I get hurt?

To the non-yogi that may seem an absurd fear —  “aren’t you just breathing and stretching?” they often scoff —  but most students (and William J. Broad) would attest that the possibility is very real.

Kristin Auble has been a yoga teacher for nearly ten years. But her journey from student to instructor was interrupted by an incident in class she’ll not soon forget – one that has informed her practice and teaching to this day.

“It was midway through a class, and the teacher had us come into a standing split,” she says. “I had been a gymnast, with pretty good flexibility. I could do a full split, but not a full standing split, so I was at my edge.”

Though Kristin was mindful of this, her instructor didn’t sense it. “The teacher came around and stepped underneath of my extended leg — didn’t ask me first — put it on her shoulder, and stood up higher. This took me past my edge and I immediately felt pain.”

And even in yoga, the authority of the teacher can be intimidating.

“I was training to become a teacher myself, and it felt awkward at that point to say something to her.”

Kristin carried on with her practice, but it soon became clear that something was very wrong. “It just progressively got worse,” she says. “Every yoga class I would tell the teacher that I had this pain, and they would say stretch and it would be ok.”

Kristin became frustrated. “You’re used to being able to physically express yourself in a certain way, move in a certain way. And I was accustomed to be able to do these things, and suddenly on one side I couldn’t.”

The situation worsened when Kristin began to unconsciously work her other leg harder. “I continued to do it on the other side, and wound up pushing that too far,” she explains. “It happened pretty quickly after the first one. I was pushing out of frustration, feeling that because I was training to become a teacher, I had to do more. Nobody was telling me that I shouldn’t. I started to feel concerned, and knew immediately that I had to do something.”

Kristin went to a sports medicine doctor for answers. “They did an MRI and saw that I had torn both of my hamstring origins, but there was not much they could do for it. Unless it’s a total tear, they don’t do surgery.”

Kristin found that a clear path forward was hard to discern.

Faced with this multiple choice, Kristin turned to physical therapy. “They said that eventually I would need to stretch, but the first thing to do is strengthen and make sure it’s healed. I iced, then heated, and then used electrical stimulation. It’s a very awkward space, the hamstring origin, but physical therapists are able to get in there and massage it, and it would feel amazing afterwards.”

Kristin soon found that myofascial massage was most helpful. “I started bringing tennis balls everywhere,” she says. “The flow of blood stops in the spot where you’re using the tennis balls, and when you release them, it brings a fresh flow of blood into that area. For a while that would really alleviate my pain. I would do myofascial acupuncture as well, which helped, though it was also quite painful —  on my wallet as well because they didn’t take insurance!”

A further injury, likely caused by Supta Virasana (Reclined Hero pose) (“I’ve wiped it from my memory!” laughs Kristin), brought her to another sports medicine doctor.

“It didn’t hurt at the time, but the next day I was limping and my knee was in a great deal of pain,” she remembers. “I got an MRI and it showed I had a torn medial meniscus. The doctor just said, ‘You’re a yoga teacher, you know what to do: strengthen all the surrounding muscles so you don’t have to rely on that area as much.’ That’s been the best advice that I’ve got: Lifting heavy weights, focusing on any poses that are going to strengthen both my hamstrings, quadriceps, as well as my ankles, hips, and glutes. In yoga we always talk about stretching; it’s unfortunate that we don’t talk about strengthening.”

Kristin observes that older people who do yoga may display flexibility, but also tend to be very frail. “If you don’t have the strengthening, you wind up injuring yourself. That’s what I’ve learned the hard way, to focus on those strengthening postures. Even if it means hanging out in chair pose for five minutes, which is brutal. The warrior postures strengthen your legs and your core.”

“Flexibility must always be balanced with strength. Focusing only on flexibility can lead to joint instability and problems with balance, as well as torn tissues. We need strength to control the increased freedom of motion that becomes available as we increase flexibility.'”

Kristin returned to class practice, the importance of strength training top of mind. But she also knew that her relationship with her teachers —and her own body — had to change.

“I would go in and tell the teachers right away that both my hamstrings were torn,” she says. “And that made them less likely to come around and attempt to adjust me in any kind of forward folds.”

Experience, even when initially negative, leads to wisdom. Kristin has advice for students who might find themselves dealing with injuries similar to her own.

“For modifications. I would say it is important initially not to do any postures that would stress the hamstrings —  e.g., hip openers, forward folds, even the standing warrior sequence. So basically, don’t practice until your doctor says it is okay. When you start practicing again, start slow, listen, and actually obey what your body tells you. Now is not the time to push boundaries. It is important to check your ego at the door. Bent knees and skipping any poses you need to is key to recovery.”

Kristin is mindful that the student has agency when it comes to their individual practice. “When the original injury happened, I wasn’t yet at that level of comfort, to know that I could voice, ‘this isn’t right. Don’t push it, I’m already at my edge.’ And honestly, in that first incident there wasn’t even time to do that. It was a split-second. I didn’t even know she was there.”

As both an experienced teacher and always-learning student, Kristin can address this issue from both sides.

“If you are able to see a teacher coming in for an adjustment, be vocal if you are at an edge of a pose and don’t have further to be pushed,” she says. “If a teacher does adjust you without permission and injures you, you should let them know, so they don’t make the same mistake on someone else. You should also let the studio manager know. If I knew then what I know now, I would have said something.”

Kristin reasserts how important it is for the teacher to obtain consent at all times, and for the student to know they have the right to decline.

“If you are a teacher you should always ask before you put your hands on a student to adjust them,” she says. “Even if a student says it is okay to adjust them, a teacher should be moderate with the pressure they are applying. Ask yourself, ‘Is this adjustment really deepening their practice?’. How does pushing a student into a higher split, or forcing someone’s legs into full lotus while in headstand deepen their practice?”

Kristin’s experience speaks to the utmost importance of boundaries and consent in the teacher/student relationship.

“If someone comes to put hands on me, and it’s not something that I’m comfortable with in that pose, I will say to the teacher, ‘No, please don’t.’ Just learning what my limitations are and how to speak up in class. Because I know what’s right for my body now.” 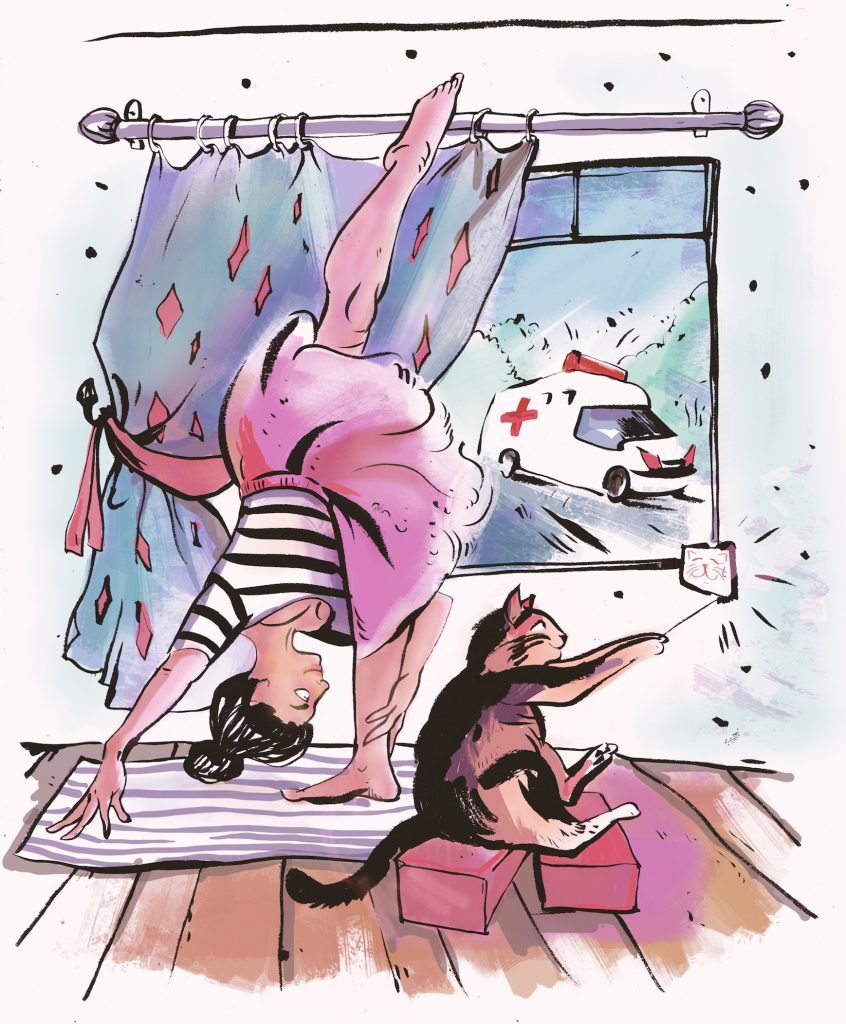