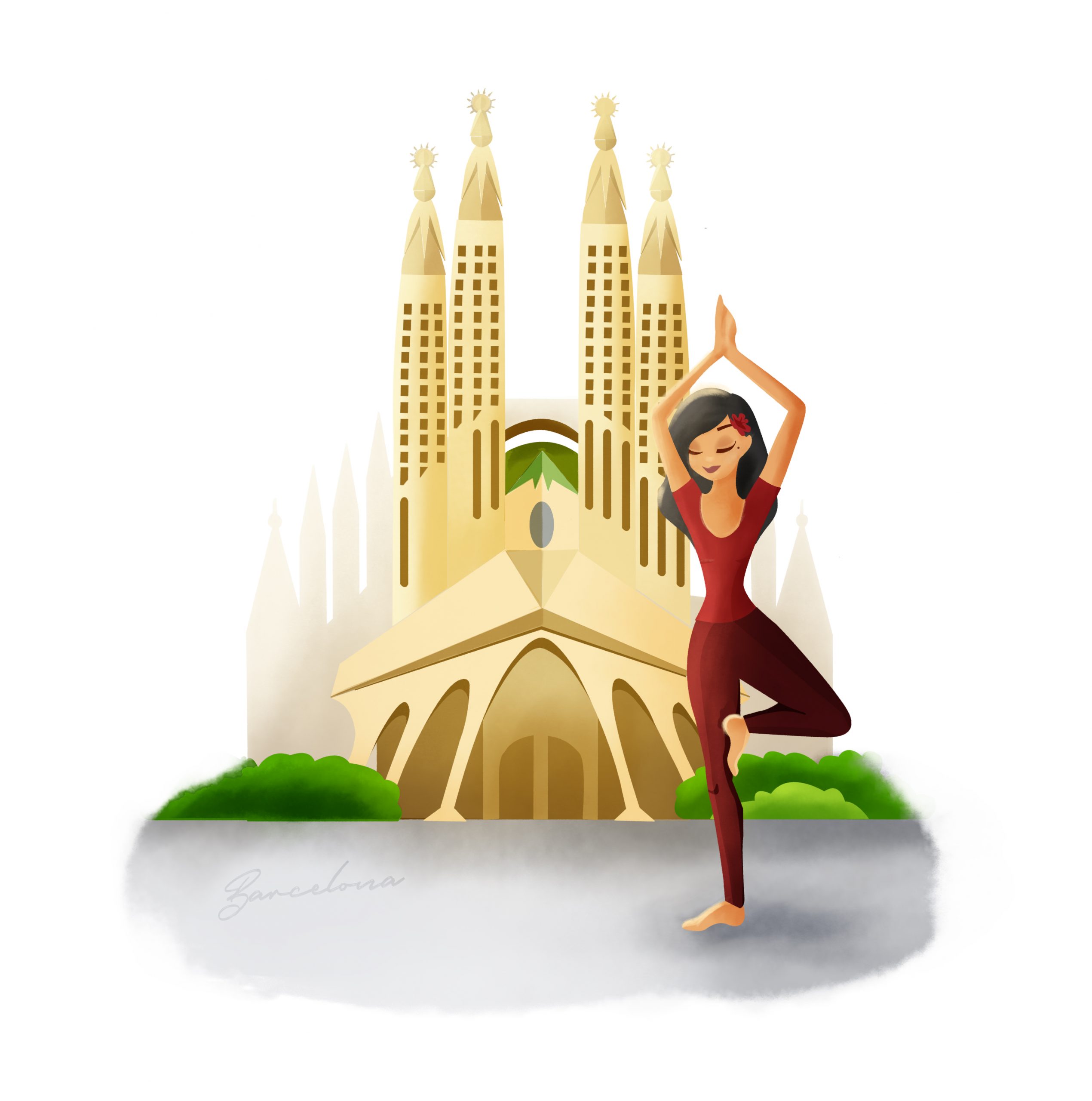 Rogue Yogi on the Road: Yoga and Tapas in Barcelona, Spain

This is a moment where I feel like that child who was told for a really long time by her parents to do something “just because”, and realizing as an adult just how thankful I am for it. In this case, it’s memorizing Sanskrit (the traditional language used to teach yogasana), and my “parents” are all of the teachers that drilled the Sanskrit into me during my journey of becoming a better teacher.

I am sitting in an Iyengar yoga studio in Barcelona, Spain.  It is in “introduction” to the world of Iyengar. Upon checking into the class, the receptionist “confirmed” that this class would be bilingual: in English, and Catalan (not to be confused with traditional Spanish, Valencian, or Andalucian, which sound similar to each other but the locals of each region will emphasize otherwise.)

As I unroll the studio’s mat onto the shiny floor, sounds of casual conversation fill the space. It is in a language that I am just barely beginning to learn. Catalan sounds similar to traditional Spanish, but there are commonly used phrases that are replaced with almost French-sounding words. It is such a cherished language, that when you arrive at the Barcelona airport, all of the signs are written in English, Spanish, AND Catalan.

This is a moment where I feel like that child who was told for a really long time by her parents to do something “just because”, and realizing as an adult just how thankful I am for it.  In this case, it’s memorizing Sanskrit (the traditional language used to teach yogasana), and my “parents” are all of the teachers that drilled the Sanskrit into me during my yoga teaching journey.

For a Friday evening, it is equally surprising and delightful to see the studio filled with curious students wanting to learn about this lineage.

The space is adorned with the same props that I have seen in the US Iyengar studios: yoga blocks, yoga straps, ladder rails and brackets attached to the walls, and a wide yet sturdy wooden apparatus that seems to be used for gymnastics. In reality, it’s for alignment. It’s as though the wood used represents a solid foundation of being precise and focused.

As I continue to scan the room, I still can’t decipher what the other students are talking about. I can only surmise from their energy, that they are doing the friendly small talk with each other about their weekend plans.

Not a moment too soon does the instructor of the night appear in the doorway. Wearing a white and poufy pair of shorts and a bright white V-neck t-shirt, he too, scans the entire room, before he makes eye contact with me. There must be a big sign on my forehead that reads “TOURIST THAT CANT SPEAK THE LOCAL LANGUAGE”. He walks right up to me and starts speaking to me in English. “Hello. Is this your first time here? Welcome! However, this class will be entirely in Catalan. I will try my best to instruct some things in English, but it will be difficult. I will ask one of my staff members to translate for you.”

The same woman who told me of the bilingual class instruction kneels right next to me and fulfills on her word. The head instructor is speaking very rapidly, and so is the translator. As I’m trying to pay attention to both people talking, I become a little lost. Feelings of self-consciousness grow. It’s actually embarrassing to not know the local language as much as the Barca-locals know mine. My years of being a teacher in the US seem to mean nothing as I feel like a student that is just beginning.

But, thankfully for all the mindfulness practice, I let go of the attachment of needing to dissect anything. Instead, I take in the moment and observe. One thing is clear: this man is extremely passionate about precision, alignment, and its direct path to enlightenment.

One thing is very clear: this man is extremely passionate about precision, alignment, and its direct path to enlightenment.

As he finishes his moving speech about understanding the body and mind connection, he has the entire class extend out their right arm. Then, he motions for everyone to lengthen the fingertips out. Naturally, the new students do this passively with the individual fingers still curled in a bit. There is minimal feeling of any muscles contracting until we see him widening the distance between his fingers. We, too, begin to reach every fingertip out and intentionally activate the joints, the ligaments, the tissue, the wrists, the forearms, the everything that’s in between the right shoulder and the right fingernails…all of this to the point of the hand micro-vibrating.

What I understand from his gestures, his translator and my perception of it all is, “To be this deeply connected to every part of your body creates a deeper connection to your spirit. To align your body this way gives you a direct path to your consciousness”.

Never in my life was I ever asked to do this. I can only think back to every time I did my yoga practice at home and feel like I had cheated myself out of a full-body effort.

This pinnacle moment feels like an epic nod to the movie Boiler Room. He could have just thrown a pair of keys on to the studio floor, and the whole room would have bought into the entire Iyengar program. (That’s NOT to say that Iyengar yoga is anything like a brokerage deal.)

He proceeds to demonstrate some yoga poses while several moments of relief came over me. Several words reach my ears that I can finally understand without a doubt: Trikonasana, Tadasana, Uttanasana, Sarvangasana and various Virabhadrasanas.

If you could visualize how these moments felt, imagine a heart rate monitor with little blips growing in degree each time a Sanskrit word was spoken. It was as though breathing could happen again.

This must be how beginners feel when they’re taking a yoga class for the first time. They don’t know what Sanskrit is. They don’t yet have the self-awareness or the proprioception throughout their bodies. They’re needing to look around to see what others are doing before they can begin to understand what to do.

This must be how beginners feel when they’re taking a yoga class for the first time. They don’t know what Sanskrit is. They don’t yet have the self-awareness or the proprioception throughout their bodies. They’re needing to look around to see what others are doing before they can begin to understand what to do.

Because it is a traditional Iyengar institution, you may not be able to drop in for anything but the “Open Class” like I did.

With this eye-opening experience, I decided to try several other studios. Would other teachers be as passionate as this one? The yoga scene in Barcelona is abundant. There were yoga studios at nearly every block in the l’Eixample and Gràcia area.

Unfortunately, the other studios I tried out either closed down by the time of this writing or I got overly adjusted by the teacher’s assistant (hello Marichiyasana D-amn that was painful) so I won’t tell you about those!

One might think that the ability to even explore studios is an amazing benefit for a Traveling Yogi. It can be until things become clear on why there’s so much studio availability: Barcelona is a busy city.

As one of the highest-visited cities in the world, the tourist presence can’t be missed. Sight-seeing double-decker buses everywhere, regular buses crammed to the brim, taxis unavailable when you need them, Airbnb’s popularity leading to locals’ rent being hiked up (forcing them to move further and further away from the city center)…and the cost of everything vs. the quality of living equates to…

STRESS. This is a stressful city to live in.

Not once did any local smile or say hello back to us. Everyone seemed to be in a rush to get somewhere. This wasn’t any different from observing people in San Francisco, Los Angeles or New York, but it definitely contrasted with our experiences in Valencia and Andalucia (where everyone was relaxed, friendly and responsive). This may conflict with some of you that swear by the awesomeness of Barcelona, but after speaking with some friends that have lived here for many years, it’s clear that the tourist-driven marketplace has shifted the dynamics.

One thing’s for sure: there were as many Tapas spots as there were yoga studios. When the yoga studios close for the evening, the foodie nightlife kicks into high gear. Dining out is not a joke in Barcelona. You’d be hard-pressed to find a place closing early as the crowds eat, drink and repeat until the wee hours of the night. So, I decided to de-stress myself at the following hot foodie spots: 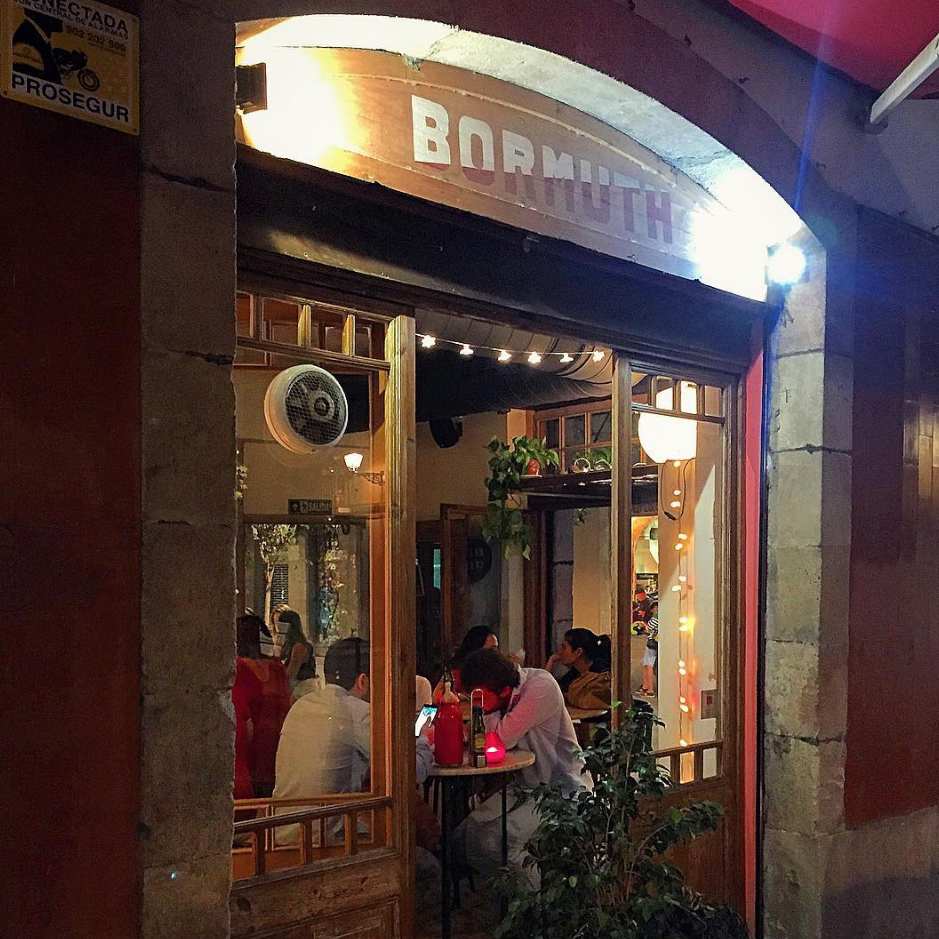 Located in El Born (where nearly every place has “El Born” in its business name), this bar+restaurant had amazing (you guessed it) vermouth. Their tortilla (not to be confused with “tortilla chips”) is a thick and flavorful pan-fried egg dish. Cooked with diced onions, massive amounts of potatoes, and a lot of salt… you’ll want to balance it out with some other tapas.
Bormuth
Carrer del Rec nº31-Carrer Plaça Comercial nº1 08003 Barcelona
reservasbormuth@gmail.com
bormuth.blogspot.com.es 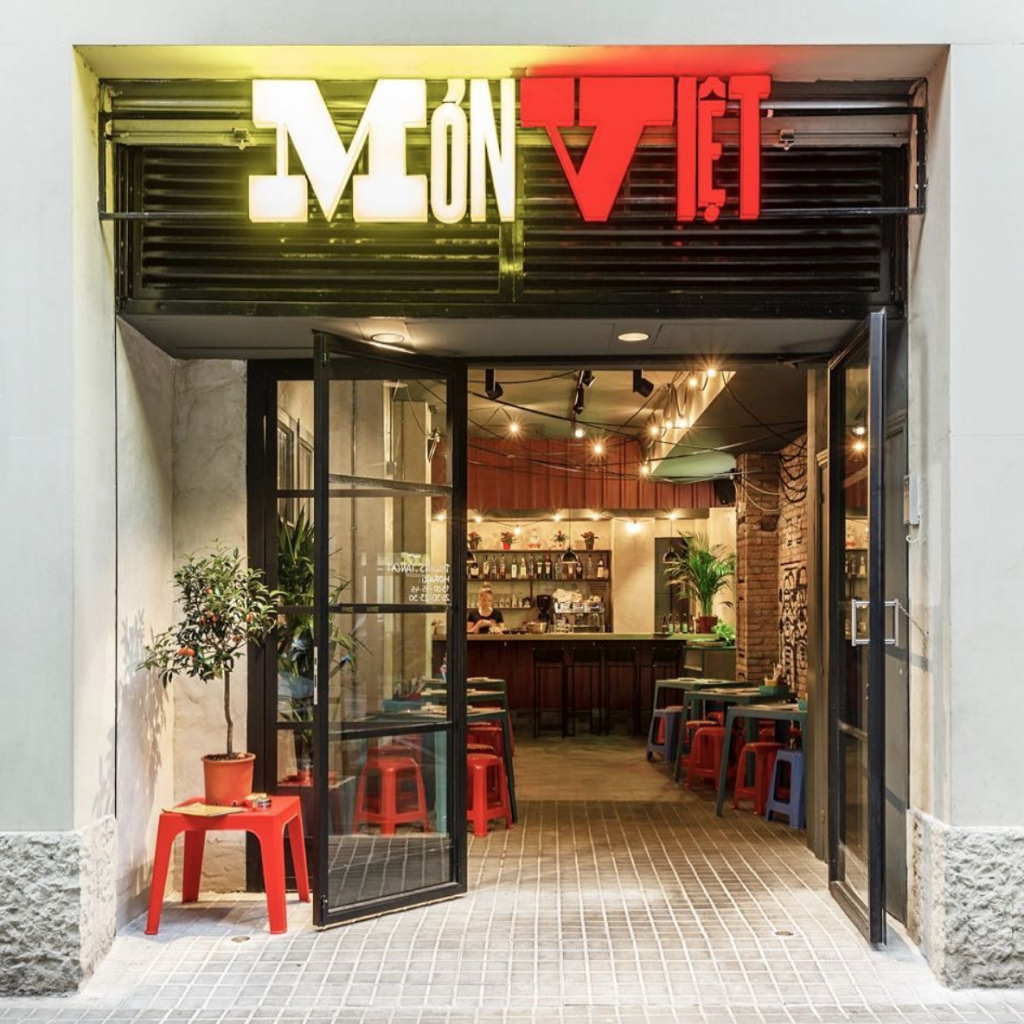 Located in the Sant Antoni area, this was the one non-Spanish/non-Tapas restaurant that had no tourists. Only locals lined up for the delectable Vietnamese dishes re-mixed to feature local Spanish ingredients (since the climate here is way different than in Vietnam, the herbs are hard to come by). Although the dishes were not traditional, and Vietnamese runs through my genetics, the flavor and aroma brought enlightenment to my senses. 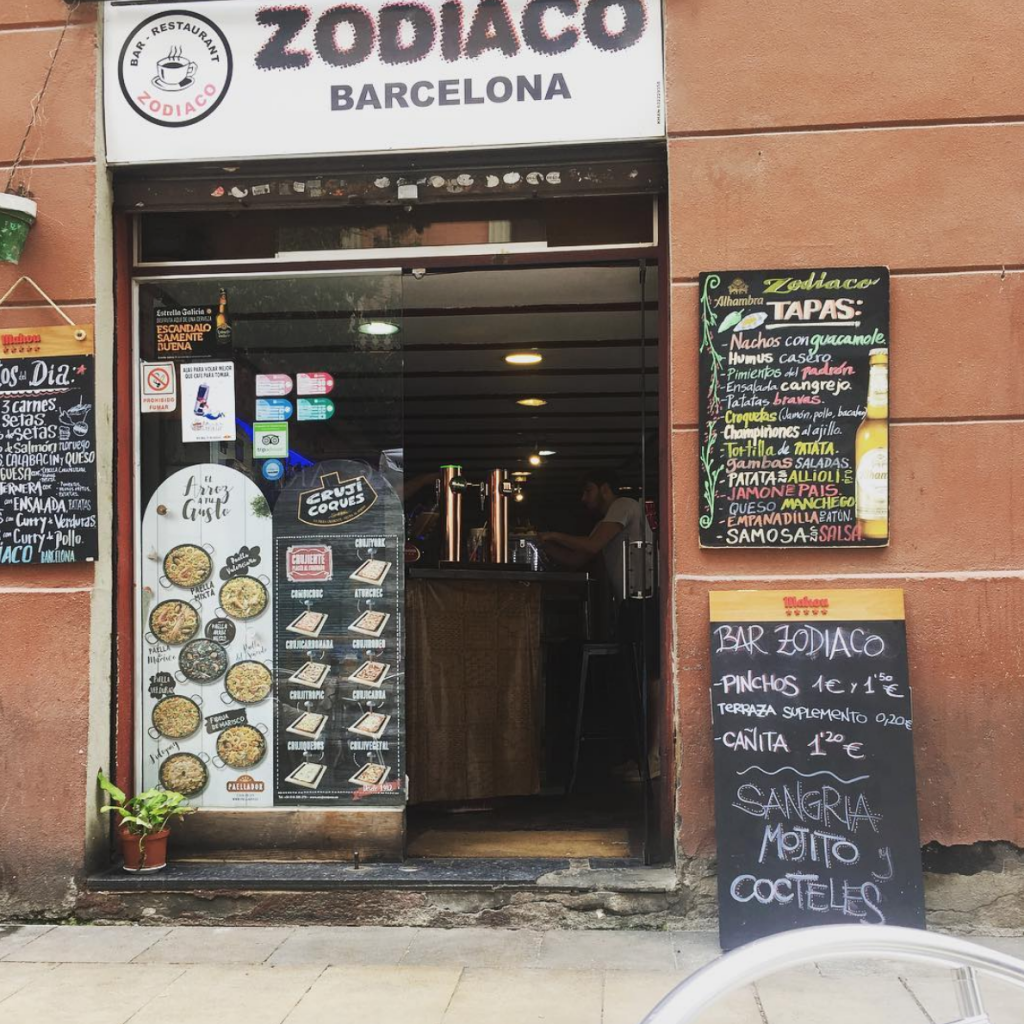 Located in the Poble Sec area, this is one of many spots serving “pintxos” instead of “tapas”. Both are considered snacks that you have with an amazing glass of beer/wine/*insert your favorite Spanish beverage here*.

The difference? Pintxos are Basque-influenced small dishes which feature a big cocktail stick “piercing” through an item and a slice of bread. Another noticeable thing? You don’t order these dishes. They’re all pre-made, you just grab them and the total is calculated at the end. This makes for a quick food coma (and the need to take a cardio class the next day). 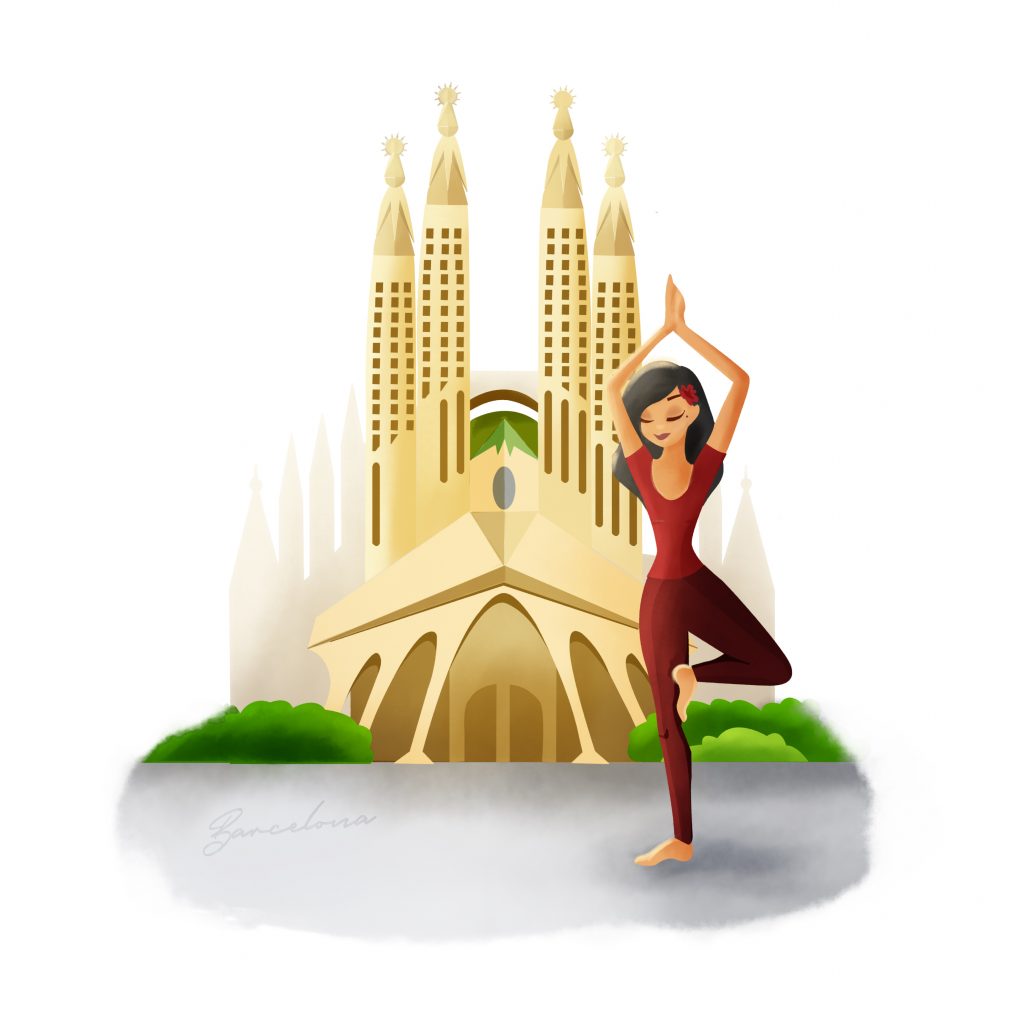