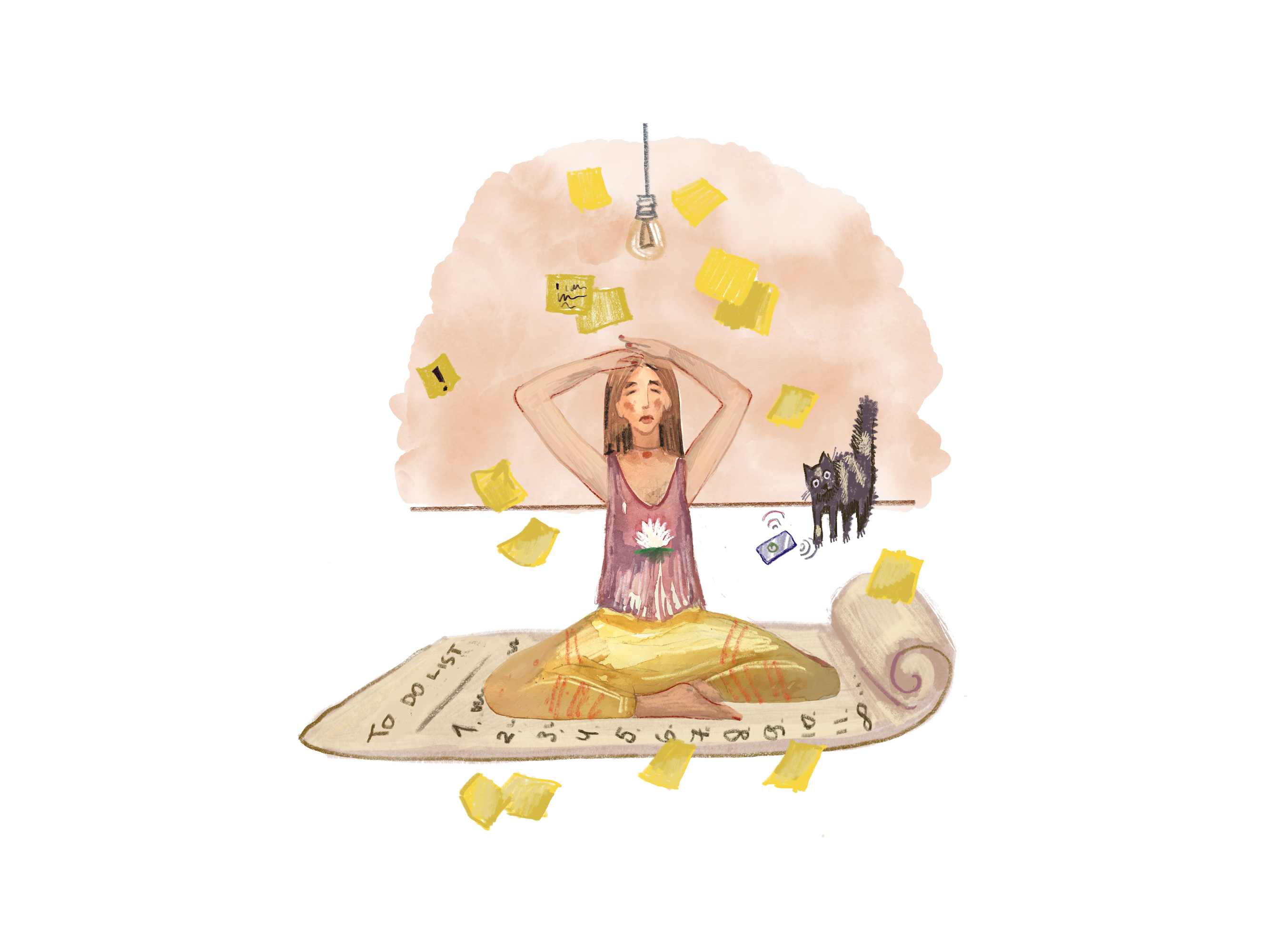 The Link Between Stress and Disease: A Hippie Myth?

Stress is making us sick. Yes, yes, we’ve all heard this before from the media or even our doctor… but is this a metaphysical concept, or has science finally caught up?

I remember distinctly walking to my functional medicine doctor’s office in East London, on a bright summer’s day and trying to list the complaints that I had to discuss. My digestion was like Russian roulette, my sleep was always interrupted, I had this undiagnosable pain in my abdomen, and my brain was as foggy as a February morning in the Scottish Highlands. After months of seeing allopathic doctors, there seemed to be no cause for these strange symptoms. The concomitant events in my life in the previous year had just been: a relationship breakdown, writing my thesis while working full-time, finishing my Ph.D., and finding a new job…so, not stressful at all, right?

From Hippocrates to Galen and throughout the Middle Ages, emotions and disease were seen as intimately linked. Disease was the result of imbalanced humours, and severe emotional reactions were thought to lead to stroke, madness, ulcers, and even death. This concept was later abandoned during the Renaissance with the scientific outlook that the body was merely a machine made up of only physical parts. This was a departure (and arguably a step back) from the previous “the whole is greater than the sum of the parts.”

The concept of emotions and disease being linked had a resurgence at the beginning of the 20th century through the work done by Hans Selye, the Canadian endocrinologist who pioneered the work on the response of an organism to stressors. However, despite the establishment of Psychoneuroimmunology later on—the field that investigates the connection between the psychological processes and immune and nervous systems of the body—in everyday clinical practice, the link between stress and disease appears to be ignored.

A primer on stress

The concept of stress was first introduced into the medical lexicon in the 1930s by Selye and is commonly defined as the response to a real or perceived threat to homeostasis (a state of stable equilibrium). The human stress response involves the activation of several systems in the body, including the endocrine, nervous, and immune systems through the hypothalamic-pituitary-adrenal (HPA) axis. Cortisol also called the “stress hormone,” is the main effector in the HPA axis and it regulates processes such as inflammatory responses, metabolism, and blood sugar level. Acute and especially chronic stress has been shown to implicate cortisol on an array of conditions such as depression, autoimmune diseases, heart disease, and some cancers.

As a research scientist myself, I can easily get caught up in the biochemical details when explaining something that Yoga philosophy could also explain. I live in a tug of war: I spend my workdays finding the scientific evidence for mental health therapies while living my life guided by the teachings of yoga philosophy that for the most part lacks scientific backing. I am a postdoctoral researcher in the field of psychoneuroimmunology, studying how art can impact the physical and mental wellbeing of people with Parkinson’s disease, women suffering from postnatal depression, and stroke survivors. My work life is dictated by rigid methods like questionnaires, databases, and clinical processes to objectively measure mental health outcomes for patients, but my personal life is imbued with aromatherapy, meditation, and positive affirmations that transform my inner world.

I have finally read When the Body Says No: The Cost of Hidden Stress after months of hearing about it in podcasts and from friends. This book is a fascinating exploration of stress and illness by the Canadian doctor, Gabor Maté. If you have not heard of his name, Dr. Maté has done groundbreaking work in the fields of addiction, stress, chronic disease, and childhood development. A lot of his research explores the mind-body connection, a field that the Western world is only now tapping into (meanwhile, Eastern philosophies established it centuries ago). His perspective can be controversial—it breaks the rigidity of Western medical practice (where symptoms are treated instead of the root cause of disease), especially when it comes to placing some of the responsibility on patients. But in doing so, he empowers patients to gain awareness of their emotions, understand their stressors, and take action to make the changes necessary to lead happier and healthier lives.

In his book, Dr. Maté shares the fascinating story of Jacqueline du Pré, a British cellist who only expressed her emotions through her music, never feeling that she had a place in the world to express them outside of her cello. After leaving her marriage, pursuing a love affair with her brother-in-law, and falling into a deep depression that made her unable to play cello for years, Jacqueline was diagnosed with Multiple Sclerosis. Dr. Maté shares numerous other stories where individuals experienced prolonged stress and repressed emotions which led to heartbreaking diagnosis.

After years of self-work, meditation, self-development techniques, energy healing, yoga, and some good old therapy, I can now clearly see the link between a stressful week at work with a cold sore or months of worry about my finances with continuous headaches and coughs that culminate in a chest infection. It is also clear to me that my cells respond to the environment via chemical messengers in my bloodstream—it is literally their job. And after years of sweeping under the rug the emotional impact of my parent’s relationship and the ending of my engagement, I am not surprised that my body and my mind were on the verge of getting seriously sick.

Before we go further, I would like to offer a caveat: I am not ignoring genetic predisposition or other factors for disease onset, and neither does Dr. Maté in his book. This piece is not a nature/nurture-style debate, but an acknowledgment that the psychological milieu of an individual who has a genetic predisposition to a certain condition can tip the scale toward disease. When you add the nervous system, immune system, and endocrine system together and learn how they interconnect, communicate, and mutually influence each other, a clear understanding of how repressed emotions and trauma can lead to disease becomes evident.

In addition to the everyday stressors that modern life presents us and our stiff upper lip when it comes to acknowledging and moving through difficult emotions, we are now smack dab in the middle of a pandemic. We can’t help but stay glued to our screens to learn about the latest COVID-19 spikes, lockdowns, and travel restrictions, all while being in some form of social isolation, awash with fear and loss. Add uncertainty about the future and you have the cherry on top of the cake for a society in a state of chronic stress.

So, what can we do about it? What can we do that is within our power and may just be the thing that keeps us balanced? The answer is yoga. But more specifically, yoga as a way of life. The ancient practices of yoga have been designed to prevent mental suffering.

I suggest embodying practices that allow us to stay in our bodies, to be present and pay attention to what is: listening to music, regulating our breath through pranayama, spending time in nature, and connecting with other individuals. Yes, ancient yoga texts suggest that withdrawal from society in a cow-dung covered hut is the way to enlightenment, but I would suggest the opposite: belonging in community, service to others, and presence with a pinch of self-analysis.

When I realised that I was on a highway fast approaching sickness, I did the obvious: I stopped. When you’re driving fast and you realise you’ve taken a wrong turn, your instinct is to break, right? Not so easy, it turns out. It took me many months of work to revert years of emotional self-neglect. That summer’s day walking to my doctor’s office I started making the connection myself: all the stress and lack of self-care were the potential contributors to all my strange physical symptoms. My body was literally giving me signals, one after the other, and asking me to slow down and self-enquire.

Now, looking back, I’m glad I dove deep into my asana practice, started studying Samkhya and Yoga, and of course, got a little help from my friends (and my therapist!). Now I am a big advocate for sharing all that swims in my mind, talking about feelings rather than letting them fester, journaling, and breaking taboos (there’s no shame, we’re all the same!). I can clearly connect my abdominal pain with anxiety and I have the tools to deal with it—meditation and journaling. Yoga Nidra has helped me with my sleep, and I can attribute my mental clarity to eliminating caffeine and using “thought detangling” techniques that therapy has taught me.

For me, I think my experience highlights the importance of human connection and brings me back to examine what is important in life. The extended period of chronic stress that we are all living as a species is unheard of, and it is only fair to believe we are unequipped to deal with it – if it wasn’t for the teachings of yoga. This way of life invites us to develop further strategies to cope with uncertainty and fear while keeping us grounded. As we transform stress into a balanced state of living, we might just be able to steer disease away. 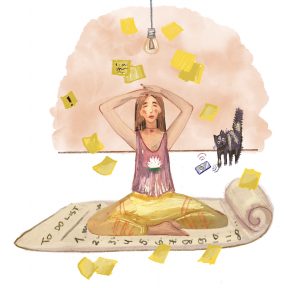